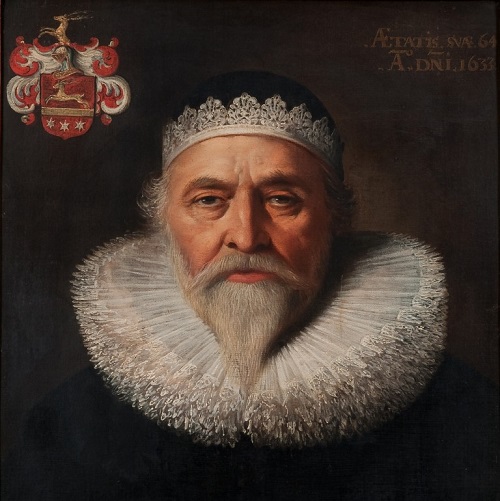 Baldwin Hamey, MD, was born at Bruges in 1568, and studied at Leyden, where he was matriculated 28th April, 1586, and where, after an unusually extended course of study, he took the degree of doctor of medicine with the highest applause. About this time, the professors in that university were requested to select from among their graduates a fitting person for the office of physician to the Muscovite Czar, Theodore Ivanowitz, and they nominated Dr Hamey, who, by the advice of his teachers and friends, was induced to accept the appointment. He proceeded to Russia, where he remained five years, and performed the arduous and responsible duties of his office to the entire satisfaction of the Czar.

He returned to Holland in 1598, married at Amsterdam, and soon afterwards settled in London. On the 12th January, 1609-10, he was admitted a Licentiate of the College of Physicians.

Dr Hamey by his will left to the College twenty pounds. His portrait, by Cornelius Johnson, was extant in 1733, and then in the possession of his great-grandson, Ralph Palmer, of Little Chelsea, Esq.