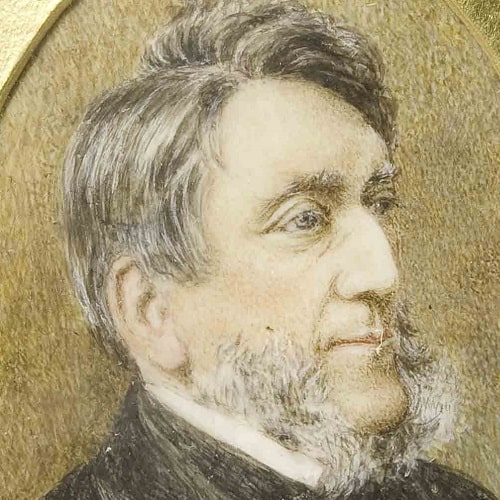 Alfred Swaine Taylor was born at Northfleet, Kent, the eldest son of Thomas Taylor, a captain in the East India Company’s fleet, by his first wife, Susan Mary, daughter of Charles Badger of Kent. He was sent to a private school until, in 1822, he was considered old enough to be apprenticed to a practitioner near Maidstone. A year later, he entered the united Medical School of Guy’s and St. Thomas’s Hospitals. He paid a visit to Paris in 1825, returning to receive the prize for anatomy at St. Thomas’s. On the separation of the Schools, he remained at Guy’s and benefited from the teaching of Astley Cooper and Green. After qualifying in 1828, he was again drawn to Paris to attend the lectures of Orfila, Dupuytren, and Gay-Lussac. He made a brief geological survey of Auvergne and visited the Montpellier School before making an adventurous voyage to Naples, where he stayed for nine months and published two papers in Italian. His homeward journey on foot across the Continent took him to no fewer than eight medical schools. Taylor spent the winter of 1829-30 in studying at Guy’s. In 1830 a stay in Paris, at the time of the Revolution, enabled him to watch the treatment of battle wounds by Manec and Misfranc.

Since 1825, he had shown leanings towards medical jurisprudence, and in 1831 his appointment to the newly established chair at Guy’s, which he held until 1877, gave him the opportunity to achieve a reputation as one of the foremost authorities on this subject. His election as joint lecturer on chemistry in 1832 provided the chance to win equal renown as the leading toxicologist in the country, and in that year there appeared the first of his long series of memoirs on poisoning. Taylor’s two main books passed through many editions and came to be regarded both by lawyers and by physicians as standard works in his lifetime. His Elements of Medical Jurisprudence, first published in 1836, which formed the basis of A Manual of Medical Jurisprudence (1844) and of The Principles and Practice of Medical Jurisprudence (1865), and his Poisons in relation to Medical Jurisprudence and Medicine (1848) performed an invaluable service in codifying legal precedents and rulings and relevant anatomical and chemical data. He was known to a wider public by his appearance as a witness for the prosecution in celebrated murder trials, including those of Drory, and the poisoners Tawell, Palmer (who first exploited the possibilities offered by life insurance policies), Smethurst and Catherine Wilson. He was a commanding figure in the witness box, unbending and relentless. In view of the danger of partisanship in medical witnesses, Taylor favoured the establishment of official experts or assessors for trials involving medical evidence. He married in 1834 Caroline, daughter of John Cancellor, a London stockbroker, by whom he had one daughter. He died at Regent’s Park, London.