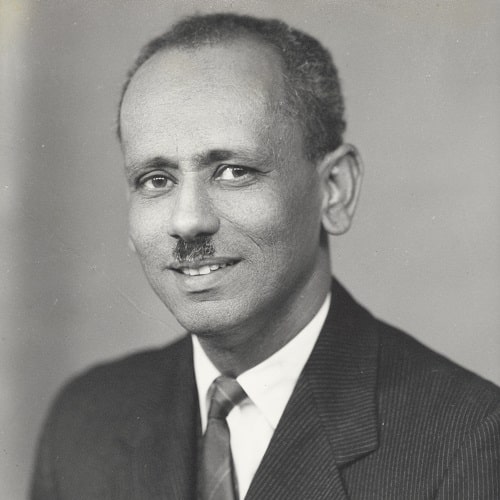 Abdel Halim Mohamed Halim, widely known as ‘Dr Halim’, was one of the most distinguished Sudanese doctors of his generation. A polymath, he was also a politician and activist, a journalist, a novelist, a sports administrator and a public servant, to name just a few of his roles. He represented the cultured, educated elite of Sudan in the 20th century.

He was born in Omburman into a notable Sudanese family, ‘the Hashmab’, renowned for producing pioneers in politics, religious jurisdiction and journalism. Halim was named after his paternal grandfather, Abdelhalim Musaad Hashim, a Mahdist prince and military leader, who played a decisive role in the battle of Shaikan in 1883 and the defeat of the British colonel Hicks Pasha, and also in the siege and fall of Khartoum in 1885. His father, Mohamed Abdel Halim, was one of the first Sudanese to enrol into the civil service following the re-conquest of Sudan by Lord Kitchener in 1898.

Halim was first educated at a religious school (or ‘khalwa’) and then entered Omdurman Primary School, one of the first schools set up in Anglo-Egyptian Sudan. He then went to Gordon Memorial College in 1924, into the accountancy section. In 1929 he was selected to enter Kitchener School of Medicine. He graduated in 1933 top of his class and as the winner of several medical prizes. During his medical school years Halim was mentored by Paul Squires (the first lecturer of medicine) and Roy Mervyn Humphreys (the first senior physician in Sudan), two distinguished British doctors who played a crucial role in developing medical services and education in Anglo-Egyptian Sudan. Both became Halim’s lifelong friends.

Following his graduation, Halim received his medical training at Khartoum Hospital as a house physician and then as a medical registrar. In 1939 he was posted to Britain for further training in medicine and cardiology. The onset of the Second World War interrupted his studies and he had to return to the Sudan, where he worked as an assistant to the senior physician in Khartoum Hospital (first Humphreys and then Alexander Cruickshanks). He subsequently received further training in medicine and cardiology at Hammersmith Hospital, London.

In 1950 Halim became the first Sudanese director of Omdurman Hospital (the second largest hospital in the Sudan), and in 1953 he was appointed as a senior physician to the Ministry of Health and also director of Khartoum Hospital, as the first Sudanese physician to hold these posts. His tenure witnessed the huge expansion of the hospital, with the building of the first extension, with many departments and services being added. He also orchestrated the building of its twin hospital, the Shaab Hospital, which hosted cardiorespiratory services and later neurology, neurosurgery and dermatology.

From 1952 Halim was a member of the council of University College Khartoum (as the Gordon Memorial College had been renamed) and, when it became a fully-fledged university in 1956, he became the first Sudanese chairman of the university council (a post he held until 1965). Halim taught at the Kitchener School of Medicine and, after independence, he continued to be a member of staff after it became the faculty of medicine of Khartoum University. Halim trained scores doctors in Sudan and he also helped organise the training of many Sudanese doctors in Britain. Many of those he trained made major contributions to the development of clinical services and medical education, not only in Sudan, but also in neighbouring countries such as Saudi Arabia, the Gulf states and Libya.

Halim was one of the founding members of the Sudanese Medical Association in 1949 and was the first president (from 1949 to 1965). In 1962 Halim was elected to the fellowship of the RCP, one of the first Sudanese physicians to receive this honour, and in 1965 he was awarded an honorary MD from the University of Khartoum in recognition of his contribution to the university. His commitment to medicine and medical education continued well beyond his 80th birthday.

In 1938 Halim was among the founders of the Graduate Conference movement, which advocated a better life for the Sudanese and called for wider access to education. The movement helped set the path for Sudanese nationalism and independence, eventually won in 1956. In 1942, with Ismail Al-Azhari and others, Halim helped draft the Memorandum of Independence. He was also the confidant and political adviser to Sir Sayyed Abdel Rahman El Mahdi, son of the Mahdi of the Sudan, a key religious and political leader. According to the Sudanese historian and scholar, Fadwa Abdel-Rahman Ali Taha, Halim became disillusioned by the intense divisions that engulfed the nationalist movement following independence, and he felt that much could have been achieved if the Conference Movement had stayed on course.

With several other members of his family, including his cousin, the Sudanese poet, lawyer and politician, Mohamed Ahmed Mahgoub, Halim helped found the ‘Hashmab group’, one of the first organisations that advocated the education and enlightenment of the Sudanese people. This later evolved into the ‘Al Fajr’ (the Dawn) group, and their journal – also named Al Fajr – became a hub for social, cultural and nationalist movements in Sudan. Halim was a regular contributor to the journal under an assumed name and, with Mahgoub, he co-wrote a novel, which advocated personal sacrifice for the national cause. At the time, Halim was known to have donated the money he saved for his wedding to a fundraising campaign organised by the Graduate Conference to build schools in impoverished parts of the country.

Following the overthrow of the first military dictatorship in 1964, Halim joined an interim five-member ruling council, along with two other doctors, el-Tigani el-Mahi, a psychiatrist, and el-Mabarak el-Fadil Shaddad, an obstetrician.

Halim was also a renowned administrator and civil servant. In 1956 he became president of Khartoum Borough Council, and in 1960 he was mayor of Khartoum. He was a founding member and president of the Confederation of African Football (CAF) and president of the Sudanese Olympic Committee for many years. He was chief of the medical committee of FIFA, football’s governing body, and in such capacity he toured many countries. Between 1958 and 1962 he was a member of the executive council of FIFA, and in his final illness he was visited by Sepp Blatter, president of FIFA, in tribute to his contribution to world football.

Halim’s wife, Khalda Ahmed Khalil, whom he married in 1942, predeceased him by many years. Halim was survived by two daughters and five sons. All his sons followed him into medicine – two (Murtada and Mahdi) became cardiologists, Mohamed (Tony) is a general physician and another, Magid, became a consultant in infectious diseases.

The famous and prolific Sudanese scholar, Mansour Khalid, fittingly nicknamed Halim the ‘wise sheikh’, in memory of the Persian physician and polymath, Avicenna. Halim’s legacy as the ‘father of medicine in the Sudan’ will survive for many generations to come.

Tarik A K A Elhadd