Say, florid Florister, if you can tell:

How many Patients you've dispatched to Hell?

Say Harrington of not inferior skill!

How many Church-yards thy Prescriptions fill?

Waterborne, airborne and parasite-borne diseases were prevalent in the 18th and 19th centuries. As an unfortunate aspect of everyday lives, illnesses, their symptoms and treatments were often represented in satire.

Medical practitioners at this time had little power to cure the sick or prevent death, and their treatments were often considered to be ineffective. Some were also alarmingly invasive, even violent. Doctors wielded sharp lancets, prescribed disgusting purges, and invaded bodily cavities – the treatment was often as agonising as the illness, and satire exaggerated this phenomenon.

We do not know why artists created these images from our collection, or how they were received or consumed. Humour may have been used to reduce the potency of the fear of sickness and death, and of the treatments themselves. Light-hearted representations of common illnesses may also have appealed to healthy audiences, who could view them with amusement and relief.

In these tiny, intimate scenes, King Louis XIV of France (r. 1643–1715) bends over his bed in his bedclothes. An aproned doctor administers a rectal enema as a purgative treatment, then watches as the king sits on a chamber pot. The enema would have contained warmed water or milk scented with rose, orange or angelica.

This undignified representation of the king may not have been shocking to a contemporary audience. Enemas were commonly used, and fashionable among the royals and nobles of Europe. They were believed to maintain good health and complexion, and relieve the symptoms of overindulgence such as bloating and constipation.

Enemas were also satirised to expose the physical violence of some medical treatments. Doctors routinely caused discomfort and pain by using aggressive procedures that prodded, poked and stabbed at the bodies of their patients. Enemas were used to correct humoral imbalances thought to be the cause of disease or illness. The nature of enema administration – via the anus or vagina – also hinted at sexual threat and violation, and the doctor was the perpetrator.

Who were these images created for? Their small, intimate design is a contrast to the satirical images published in magazines or newspapers. Perhaps they were intended for private amusement.

Accepted from Jean Symons under the Cultural Gifts Scheme by HM Government and allocated to the RCP, 2018 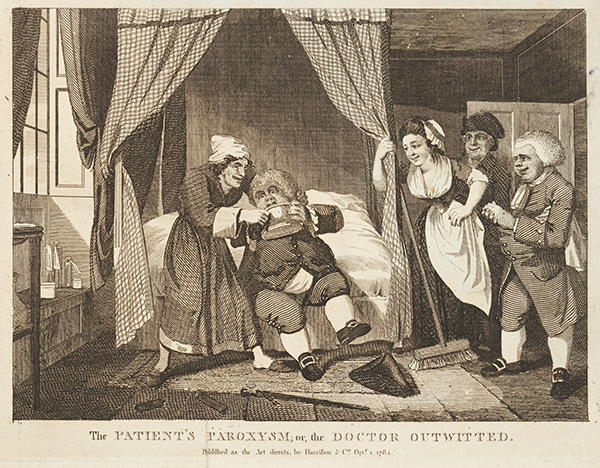 The patient's paroxysm or the doctor outwitted

The patient's paroxysm or the doctor outwitted

Engraving after Samuel Collings, published as the frontispiece to the September issue of ‘The wit’s magazine’, vol 1, by Harrison & Co, London, 1784

Doctors notoriously prescribed medicines and treatments that were often unpleasant, and usually ineffective.

In this illustration a trick is being played on a doctor who over-prescribed and paid unwanted visits to patients. A man wearing bedclothes and pretending to be ill is forcing the doctor to drink a mixture of all his own medicines and draughts. His hat and cane are discarded on the floor, and empty medicine and pill bottles stand on the windowsill. From the look on the doctor’s face, the mixture he is being forced to drink is not agreeable.

The scene is observed by a chambermaid leaning on her broom, a waiter, and a coachman who rubs his hands together gleefully. They are delighted as the doctor receives his comeuppance and suffers through the foul medicine, as they no doubt have done in the past.

Patients were at the mercy of doctors and their harsh treatments. By showing that a doctor could be outwitted, and represented as a fool, the viewer could take comfort that the doctor was no threat. Additionally, the idea that a doctor could be outsmarted by members of the serving class – his supposed inferiors – would no doubt provide viewers with a sense of satisfaction, and perhaps vengeance.

View catalogue entry for The patient's paroxysm or the doctor outwitted 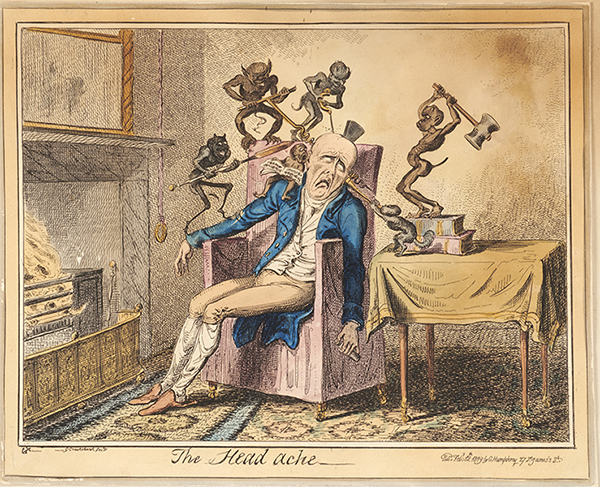 Physical discomfort is a central theme in medical satire – it is something we all experience and can relate to. Headaches are a commonplace ailment and an easily recognisable discomfort, depicted vividly in this image by George Cruikshank (1792–1878).

Cruikshank’s patient is suffering intensely from his headache. While he languishes in a chair, six devils torment him by hammering, boring and drilling into his skull, and singing and trumpeting in his ears. One grinning devil teases him with a red-hot poker. The viewer can really empathise with the patient, who is overwhelmed by the headache’s ability to incapacitate. The viewer can also be amused by the patient’s exaggerated expression, and perhaps relieved that they are not suffering in the same way themselves.

There is an empty medicine bottle in the patient’s left hand, and a pile of books on the table. The image is mocking the patient’s failed attempts to treat himself. It is also a satirical commentary on modern medicine’s limited ability to cure – in this case medicine is ineffective against the simplest and most commonplace of complaints.

View catalogue entry for The headache

Next: A time and a place