In 1825 the Royal College of Physicians was bequeathed a remarkable conversation piece by Johan Zoffany (1733–1810): a painting representing the Scottish-born anatomist, surgeon and midwife William Hunter (1718–1783) giving an anatomy lecture. It’s one of our most significant paintings – it has been exhibited throughout the UK and abroad, and extensively studied by scholars and art historians. 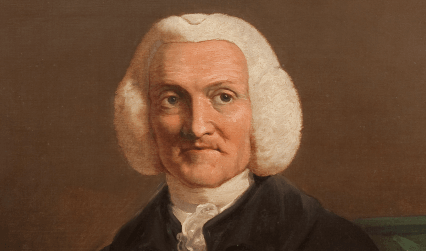 William Hunter is himself a pretty interesting character. He was connected to the Royal Society, the Society of Antiquaries, and the Medical Society of London, as well as to the RCP. He was also the first professor of anatomy to teach artists at the Royal Academy, and he became physician-in-extraordinary to Queen Charlotte, wife of George III, attending all but one of her fifteen births.

While prospering in London he commissioned the architect James Mylne to design a residence for him at Great Windmill Street, with an anatomy theatre, preparation rooms, and a large museum to house his growing collections of coins, minerals, shells, insects, books, prints and curiosities. These collections were posthumously donated (at Hunter’s bequest) to the University of Glasgow, as the foundation of the Hunterian Museum.

Despite all this, we do not know for certain what is going on in Zoffany’s painting, besides that it shows Hunter lecturing to a group of smartly dressed ‘gentlemen’ (as Hunter himself described his attendees), one of which is Sir Joshua Reynolds, first president of the Royal Academy.  Who are the other figures? Is this Hunter lecturing to the Royal Academy, in his role as its first professor of anatomy? This seems likely, but it is not certain. If not, what is Hunter doing exactly, and where is the scene set? We are convinced that the painting tells an interesting and dynamic story – so I applied for a bursary from the Understanding British Portraits network to fund a little bit of research to try and find out a bit more.

A little bit of research inevitably escalated into a lot of research. My initial investigative approach was to meet with academic experts who have worked on Zoffany and this painting, to pick their brains and identify any untapped routes of exploration. Martin Postle, deputy director of studies at the Paul Mellon Centre, suggested that in order to understand more about this painting I should look more into Hunter’s lectures themselves, his dissections, their audiences, and the context in which they took place in the 1770s. It is possible that some figures in Zoffany’s painting have nothing to do with the Royal Academy, but are rather representative of a growing social class who had a more general interest in such delightful subjects as natural history, anatomy, dissections and gore. 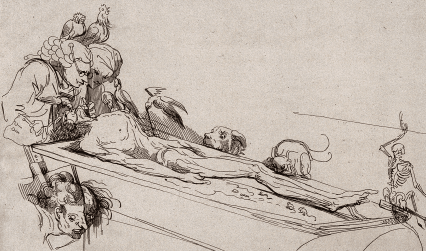 William and John Hunter dissecting. Caricature of a dissection, by Samuel Ireland, 1780-90, after a pen-drawing by John Hamilton. Wellcome Library, London

Some research into dissections and anatomy lectures seemed like it should be interesting, so with my bursary funding and laptop in tow I jumped on a train up north to Glasgow. There I met with scholars from the Glasgow School of Art and the Hunterian Museum and Art Gallery, and camped out for a few days in the university library’s Special Collections department. As the repository for Hunter’s collections and correspondence, including his lecture notes, I hoped to find some sort of evidence that would shed some light on any of the long list of questions I had about the painting.

I am very pleased to report that my trip did prove enlightening, and I was able to form some ideas about the identities of some of the sitters in Zoffany’s painting. But I won’t share my discoveries here – you will have to wait for the published results!