Skip to main content
These are a few of our favourite things...

The Royal College of Physicians (RCP) has been collecting objects, works of art, recorded interviews, rare books and documents for over 500 years. The 2021 exhibition RCP Unseen shares previously hidden stories and rarely seen items from the collections, all of which have been selected by staff in our archive, historic library and museum services team.

Staff working with collections often have favourite items that they have never had a chance to share with anyone. This can be because the item hasn’t fitted into the theme of an exhibition or within the remit of recent projects, because it was on display a lot a few years ago and now needs to be ‘rested’ (kept in store) to prevent light damage, or simply because everyone is busy and they haven’t quite got around to writing a blog post about it yet. RCP Unseen was a fantastic opportunity for us to let these items have their chance to shine, and in this mini series of blog posts the team talk about some of their favourite objects and why they selected them for this exhibition. 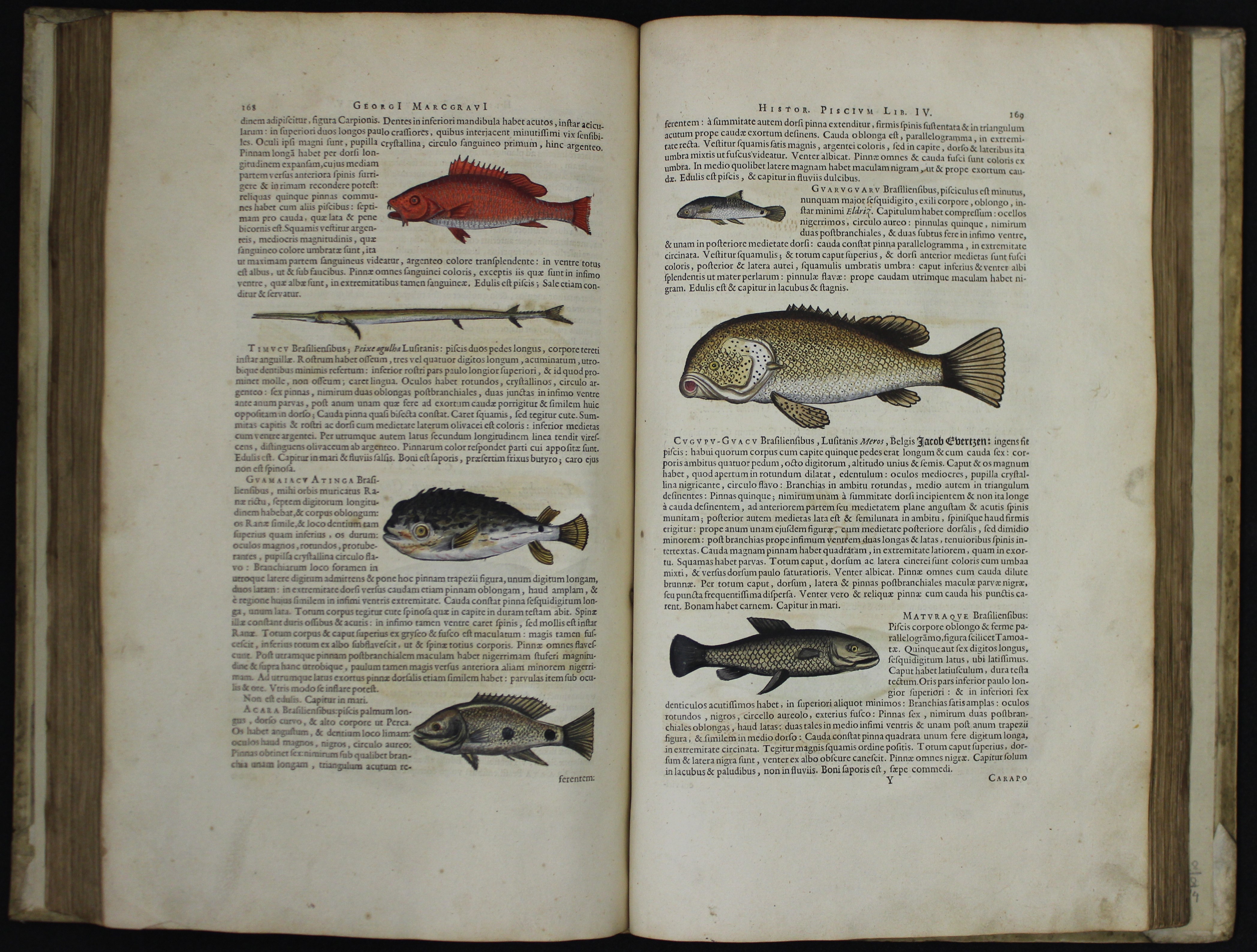 I chose this book because the illustrations absolutely knocked my socks off when I first saw it. The pictures almost seem to leap up off the page. The book is all about Brazil, with chapters on climate, local diseases, venomous creatures and their antidotes, and the medicinal properties of the local plants. It’s illustrated throughout with woodcut prints over-painted by hand in a range of vivid tones, with more skill and care than I’d previously seen in any 17th century books. The time and skill necessary to do this would have made it an expensive luxury when it was published. 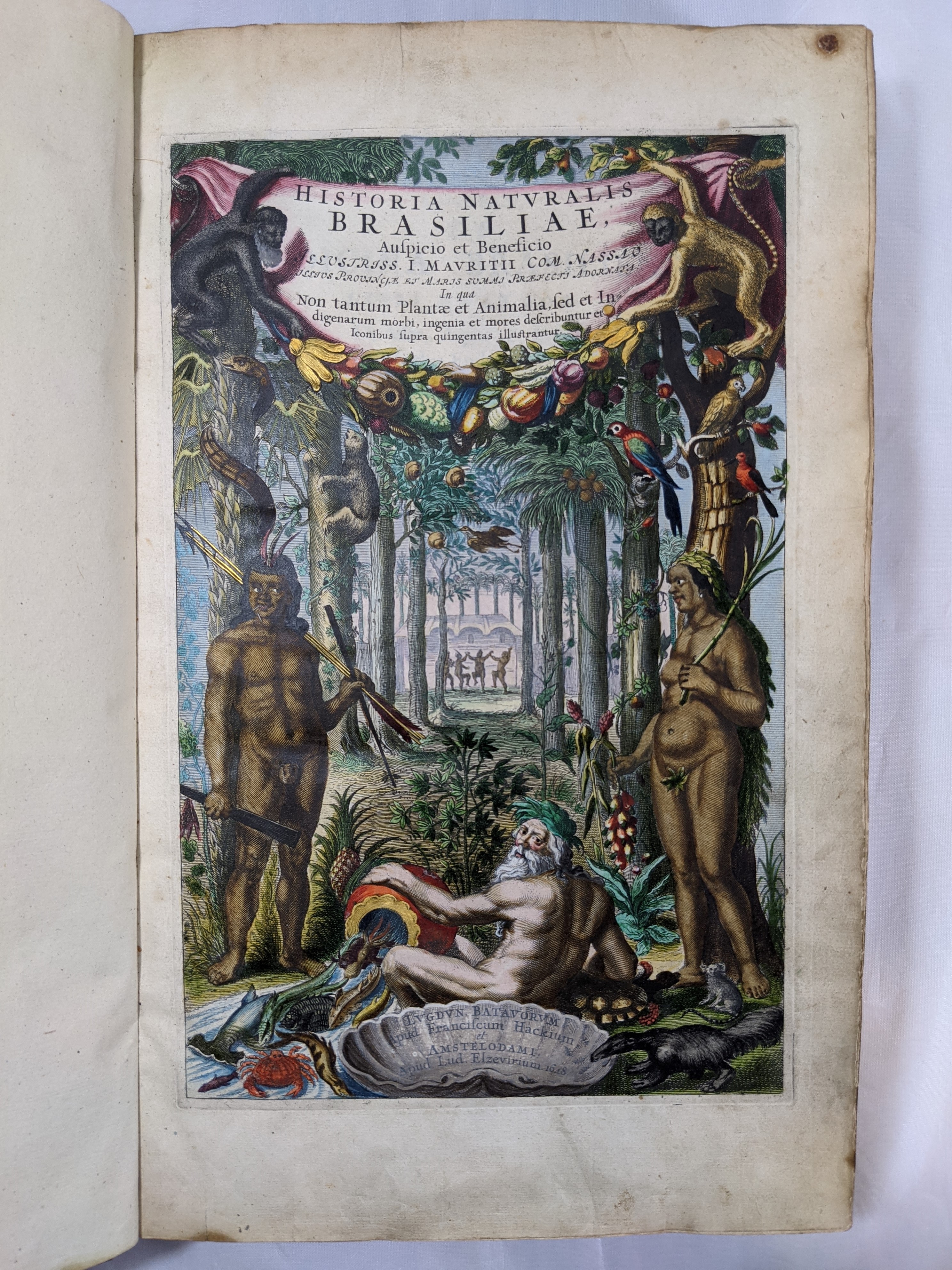 As well as delighting me, this book also forced me to confront the fact that seemingly purely scientific works of natural history and botany in the library can’t be removed from their historical and cultural contexts.  Two of the authors, Piso and Marcgraf, were both employed by Johan Maurits van Nassau-Siegen, the governor of Dutch-colonised Brazil from 1637 to 1644. Piso was official physician to the colony, and Marcgraf was employed as a naturalist and astronomer. This scientific treatise on plants and animals was produced as part of this colonial endeavour: it documents the plants and animals of lands the Dutch were taking by force.

The title page of the book makes its colonial context explicit: showing an indigenous man and woman depicted as savages, framing an idealised view of landscape, flora and fauna. The whole represents the newly ‘discovered’ country as a bounty ripe for European harvest.

I love that behind this seemingly banal form are the stories of several human lives and the society they were part of. Ann Sullivan was born in Somerset at the turn of the 19th century, but later moved to London, perhaps to find work. She married Daniel Sullivan, an Irish immigrant, and in 1835 they had a son, who they named after his father. The 1851 census shows the family living in Marylebone, London; Ann was working as a laundress, Daniel Sr a labourer, and Daniel Jr an errand boy. I could not find Ann in the records for the next 20 years, but by the time she was in her early 70s, her husband had died. Daniel Jr seems to be absent, and Ann was periodically checking herself in to St George’s workhouse in Kensington.

At this time, bodies for anatomical lectures were in high demand by medical schools and organisations such as the RCP. One source they turned to were the workhouses, where if no family came forward able to pay for a funeral, the bodies of residents could be signed over for dissection. The authorities made it as difficult as possible for families to claim the bodies of their loved ones – forms such as the one displayed were usually completed a few days after death, and the body transferred to the lecture theatre the same day or soon after. The RCP, at that time based in Pall Mall, had no anatomy theatre of its own, so used the city’s various medical schools as venues for its lectures.

In the second week of December 1875, Ann’s fellow workhouse resident, John Donovan passed away. Arrangements began to be made for John’s body to be moved to St George’s Hospital medical school for dissection in an RCP lecture. But, as the note in the right-hand margin of this form shows, John’s body was ‘claimed’ at the last minute. This may mean the RCP was gazumped by another institution, but I prefer to hope that John’s family were able to rescue his body and give him the send-off he deserved. However, the RCP still wanted a body.

Ann was now 75. We can’t know what aspects of her eventful life she might have reflected on in her final days, but we know her son was not at her side. Ann died on 13 December, the paperwork was rushed through, and her body was transferred to the medical school that same day. It may be that the knowledge gained by the medical students at Ann’s dissection was later used to help people, but she was not given the choice to consent to the process. I hope she would have appreciated being remembered in this exhibition, not just as an object of study, but as a person. 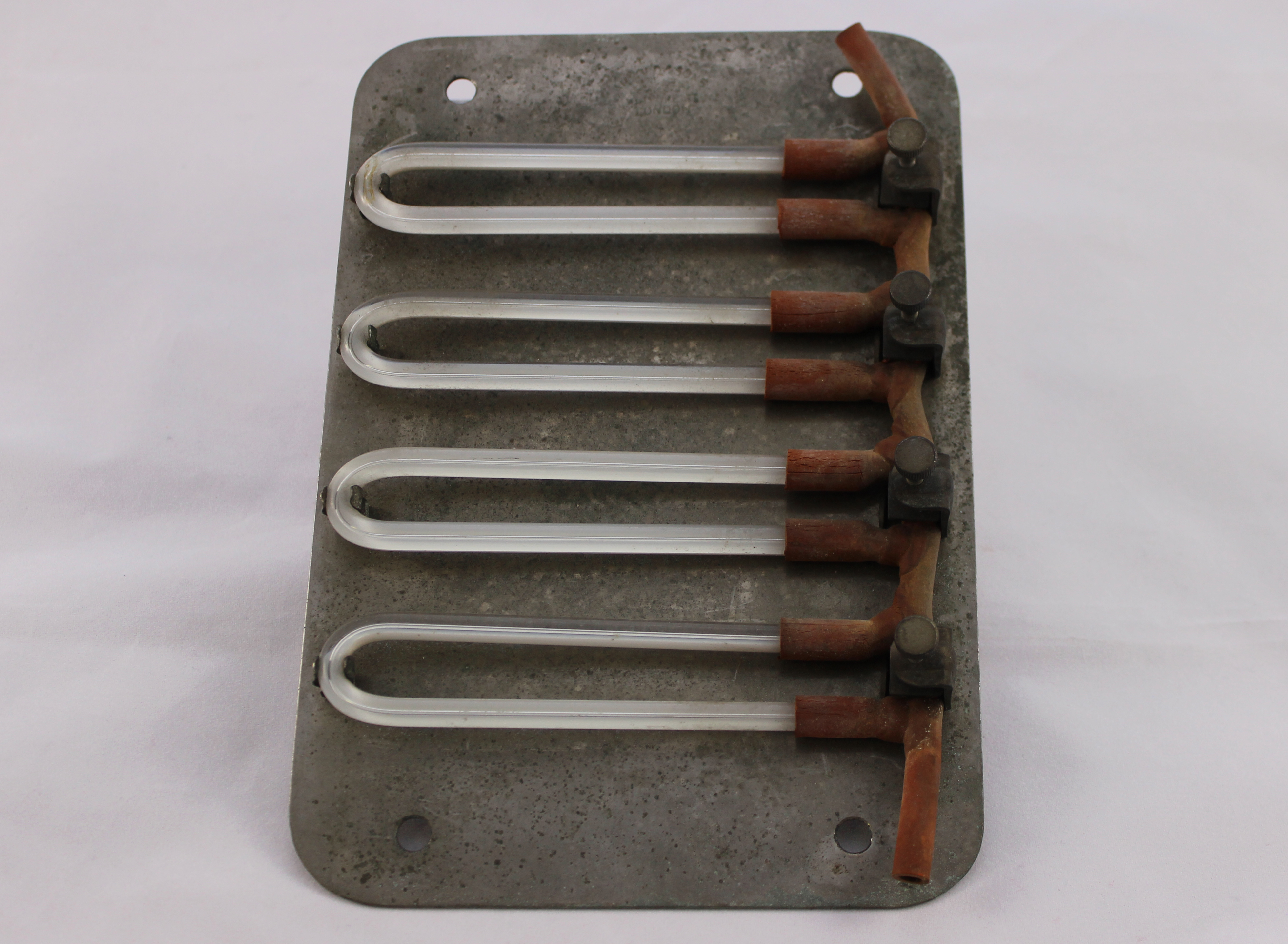 One of the greatest joys of doing an exhibition whose only premise is to display the weird and wonderful and never-before-seen, was that when deciding which objects to put in the cases, the deciding factor was: is this thing interesting?

I had never heard of a multiple manometer before. I actually think it looks like something I’d find in my garage and put in the pile to take to the skip, and it made me ponder how many objects just like this there must be in museums around the world – something vaguely related to the collection, but that wouldn’t be collected today because museums have stricter collecting policies now, and very little storage space!

This object was unidentified until recently. It was found on a shelf in our storage stack and no-one (not even the all-seeing database) knew what it was. A little bit of research later and we think it is a multiple manometer, which is a scientific instrument that uses liquid to measure pressure differences. We have no idea how it arrived in the museum collection. Many physicians in the past had wide-ranging interests and would carry out research in areas of science that would not be considered medical research today – perhaps one of those doctors donated it?

How many objects like the manometer are there in our collective collections, without identity or provenance? What proportion of our amazing heritage might we accidently assign to the skip heap if it was stored anywhere other than a museum rack? Which leads us on to greater philosophical questions along the lines of ‘does an object become valuable simply because it is put in a display case’, ‘what sort of objects do actually tell us something about our past’, or the old favourite, ‘what is art?’

So I have chosen the multiple manometer because of its surprising complexity. It appears unassuming, but it really made me think a lot about some bigger questions.