This cup was given as part of the Swiney prize for medical jurisprudence. Medical jurisprudence is an earlier name for the branch of science and medicine involving the law, now known as forensic medicine. The prize has an important place in the RCP’s history. This cup is one of five Swiney cups in the RCP museum; the other four can all be seen in the Treasures Room.

The prize was established by George Swiney (c.1786–1844) on his death. He was a wealthy Scottish physician who, after his retirement, conducted a secluded and quite mysterious life. He was said to be so haunted by the thought of his death that he repeatedly revised his will and planned his own funeral.

Swiney donated a considerable amount of money to award to significant researchers in the field of forensic medicine. The prize comprised a sum of money as well as a silver goblet or cup, a tradition which continued until 2004.

The first person to be awarded was JSM Fonblanque. in 1849. The cup awarded to him was designed in the Germanic Renaissance style by the prestigious firm of Garrard. Garrard had succeeded Rundell, Bridge and Rundell as royal silver and goldsmiths in 1830. The design of the cup started to change in 1919; it continued to follow the Renaissance style, but began to present a cleaner surface and lines. 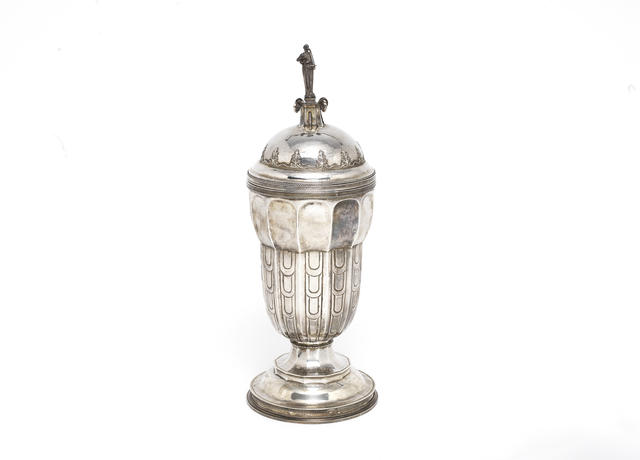 This newly acquired cup was awarded in 1929 to Sir Sidney Alfred Smith (1883–1969), a forensic scientist from New Zealand who served during the First World War. Smith became particularly well known when he applied his studies to two criminal cases that resulted in the execution of the killers: the 1913 trial of Patrick Higgins, who murdered his two children, and the 1935 conviction of Buck Roxton, a respected doctor who strangled his wife and maid.

The artist Edward Spencer was commissioned to produce a design for the cup that was both classical and restrained in shape and decoration as well as modern in manufacturing techniques. The figure on the top of the cover represents an allegory of Justice, holding weighing scales and a sword, and with a blindfold covering her eyes as a sign of impartiality. The RCP bought this cup at Bonhams auction house last month. It will be displayed in the Treasures Room in due course.