Skip to main content
Singing for Breathing: balancing the biomedical with the musical

One in a series of guest posts from the Life of Breath project team to accompany the current RCP exhibition Catch your breath curated in partnership between the RCP and Life of Breath.

Vocal coach, community choir and workshop leader and music therapist Phoene Cave is leading a workshop at the RCP on 12 June 2019 which will will provide an overview of the history of Singing for Breathing, as well as a practical, participatory element.

In 2008 I answered an advertisement for a singing teacher at Royal Brompton Hospital in London. The original idea was inspired by Bronchial Boogie in Oldham, to see if learning brass instruments might help asthmatic children. Dr Nick Hopkinson was going to be doing some research into whether singing lessons could help those with chronic lung disease to manage their breathing better.

I had a music degree and a postgraduate qualification in Music Therapy. I had studied the anatomy and physiology of singing with Vocal Process and had been teaching for nearly ten years (individuals, small groups and large community choirs). I had just qualified as a Shiatsu practitioner and had being doing yoga for twenty years, working with teachers inspired by Vanda Scaravelli, who said:

Yoga must not be practised to control the body: it is the opposite, it must bring freedom to the body, all the freedom it needs.

All the singing participants for the clinical trial had COPD. I was pleased to get the role, but very nervous; the Sister on one of the wards giggled and reminded me that “no-one has died from singing.” The wards were full of frail people in nightwear, many curled up in bed with large full face masks billowing steam. One woman said to me incredulously “I can’t even speak, let alone sing”. She did sing, though, and told me how much better she felt afterwards.  It took her back in body, mind and heart, to a time when she danced and felt alive. Music has the power to do that. 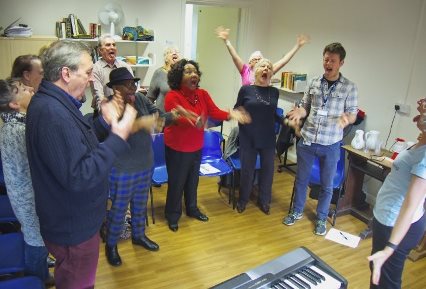 Singing together on the wards gave an opportunity to connect with others: a sense of communication and communion with other patients, as well as staff. We would sing as the lines went into the back of the hand. We would sing as bloods were taken. Nurses, porters, physios would join in a chorus as they were passing through, and consultants would smile. The patients would dance in nighties around portable IVs, hoping the wires would not get tangled! Many times, the singing could heal the strain of visiting sick relatives in hospital, in a way words never could. An aunt seeing her niece sing for the first time in years wept with joy; a brother pulled out his mobile phone and found the words to a song so he could join his wheezing sister, as he watched the breath soften and the colour lift in her cheeks with every verse.[1]

In two years, I worked with hundreds of patients at the Royal Brompton, old and young, from a variety of backgrounds and with a variety of lung diseases. Some of my most treasured work was with younger patients with cystic fibrosis (such a cruel disease). Cystic fibrosis is caused by inheriting a faulty gene, which controls the movement of salt and water in and out of your cells, so the lungs and digestive system become clogged with mucous, making it hard to breathe and digest food. Intervention was as varied as the patient population – gentle guided relaxation and breath awareness, postural re-integration for better breathing, singing known songs, working on vocal technique, focusing on the emotional expression and release singing provides, or even improvising and composing new songs. Singing for Breathing has therapeutic, practical and creative elements to help better breath management. Many patients hid their troubles behind a cheerful face and the singing gave them a place to express the truth of their stories in song. Some very dark songs were sung, and the emotional release and a safe place to connect to that darker emotion was very important. 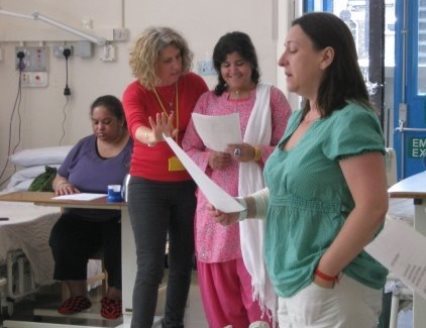 One patient awaiting a lung transplant chose to sing a song she was going to sing on her wedding day (postponed as she was too unwell). In my notes, I comment as follows:

She looks weary, oxygen piped in through a tube, her shoulders up by her ears and her body contracted.  She finds it hard to relax and to connect to the ground. Her toes are curled up. I put my hands onto her shoulders to help her to release unnecessary muscular tension. She sings low pitched “ssssshhhhheeeee’s” over long exhalations keeping a low breath – there is lateral movement beginning to appear & her belly is moving rather than her shoulders. As she starts to sing a song her voice is light and ethereal, yet heartful and warm.  She looks very different after singing. Open, relaxed and radiant even.

For so many patients, the Singing for Breathing sessions helped them overcome a fear of expressing themselves this way. They opened their upper bodies to feel the breath moving them through the song and releasing unnecessary muscular tension. Time and time again, I introduced myself to patients scared to even contemplate vocalizing. They were low in energy and mood, curled up in their beds in the dark. After the session, they had shining eyes and smiles on their faces; improved eye contact, laughter and tears were all common, as was the realization that they could relax into the singing and find a middle ground between a desire for stillness and inertia versus overexertion. Somewhere within the joint music-making came appropriate effort, that was reflected in the easing and calming of the breath and its power to gently drive them through songs they loved.

The outpatient groups for COPD continued to grow and in 2010 I released the Singing for Breathing CD, which allows patients to practice the exercises at home.  The fundamentals of Singing for Breathing are to assist participants to develop awareness of their postural and breathing patterns; change old habits through learning new exercises; return to a more natural breath pattern and reducing ‘top up’ breaths (using primary not secondary muscles); extending outbreaths through sung phrases; developing muscle memory through repetition of new ways of standing, moving, breathing and singing; exploring vocal production supported by the whole body; building stamina; and having fun. 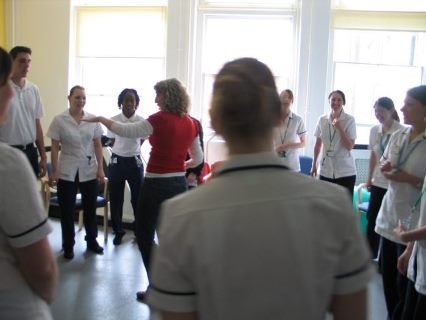 We have come a long way since 2009.  The British Lung Foundation no longer find the idea of Singing for Breathing too ‘alternative’, but embrace it wholeheartedly, and their support has moved this work on tremendously. By the end of March 2016, I will have trained thirty singing leaders funded by the BLF to set up new Singing for Breathing groups across the country.[2] In 2008 there were two Singing for Breathing groups in the UK, one led by Uditta Everett in Brighton and one by me at the Royal Brompton hospital in London. In 2016 there are over fifty groups! Top respiratory consultants and respiratory nurse specialists continue to debate and discuss the most appropriate evaluations of singers and singing teachers. We begin to open up the idea of Singing for Lung Health, not only as an evidence-based treatment, but a deeply holistic intervention. The fact the work is being taken this seriously is a testament to its efficacy.

I returned to rb&h Arts in October 2015 to revisit the Singing for Breathing programme (I now work at Harefield hospital too). Workshops with physiotherapists have boosted patient numbers, and inpatient work has recommenced, with physiotherapists referring patients for individual sessions. New work has also started with post-transplant patients at Harefield, which is proving powerful. Imagine trying to breathe with lungs that once belonged to someone else. Transplant is a lottery: some patients may never look back; others may may not make it through the operation; others may have many good years and then find themselves back in hospital, facing infection or rejection. Senior members of staff on the transplant wards are embracing and understanding how effective singing can be for patients who struggle with their breathing post-operatively. I would like to see the post reconfigured under the rehabilitation and therapies team as a music therapy post, and am particularly interested at adding a new dimension to Singing for Breathing by going into the ICU to sing with patients who are in comas.

As for my personal Singing for Breathing journey, I was born three months prematurely; my lungs didn’t work properly and I was in an incubator for a long time. My father had emphysema and lung cancer, and my son had asthma. I started smoking at a young age, and stopped the day I got the job in 2008 and started to explore my own relationship with breath and breathlessness. I am forever grateful to that advertisement, for as well as changing lives of others, it has fundamentally changed my own.

Phoene Cave is a vocal coach and music therapist. She pioneered the Singing for Breathing/Lung Health approach and trains other vocal coaches and healthcare professionals.

[1] BBC Radio 4 visited, and the Today programme did a short piece on the clinical trials with outpatients.

[2] The Sidney de Haan Research Centre for Arts and Health published a Guide to Singing and COPD and continue to develop new research in this area. Their latest project working with those in the community with COPD in South London is funded by Guys and St Thomas’ charity.