Voting for a new president is a thoroughly modern business, with ballot packs sent to fellows worldwide by Electoral Reform Services (ERS) and votes returned online or by post. However the rituals and traditions enacted on the day are dictated by centuries of RCP history, connecting the latest office holder to an unbroken line of presidents going back to Henry VIII’s personal physician Thomas Linacre in 1518. 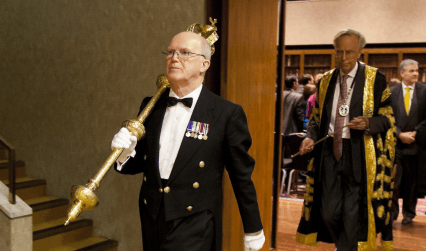 The election is held on ‘College Day’, which takes place annually on the Monday after Palm Sunday. This annual general meeting of fellows is known as comitia, a Latin term for a gathering or assembly. Henry VIII decreed that the six principal RCP officers should elect two others from the fellows, and that these eight should choose a president from among themselves. After the Medical Act, Royal Colleges of Physicians, of 1860 the president was elected by all fellows present at comitia. There is no limit to the number of times a president can be re-elected; John Caius (1510–73) was elected on three separate occasions and Sir Henry Halford (1766–1844) remained in office continuously for 24 years. Today presidents are expected to serve a four-year term.

The ceremony starts with the out-going president and RCP officers walking in procession from the Censors’ Room up the stairs to the Dorchester Library. At their head, the bedell carries the silver-gilt mace to represent the sovereign. The mace was made in 1684 by leading London silversmith Anthony Nelme. 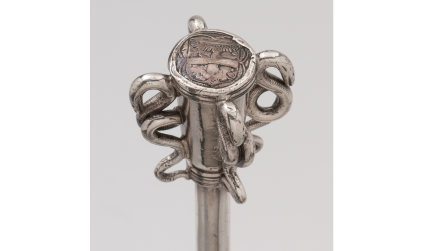 Laying the mace down on the red velvet cushion, the bedell steps up to the president to take the silver caduceus – the president’s staff of office – and places it with the mace. The caduceus was originally presented by John Caius in 1556, during his own term of office. The curving serpents at its head classically represent prudence while Caius intended the silver to indicate that a president should rule ‘not with a rod of iron’ but with ‘moderation and courtesy’.

The president’s black damask robe has nine bars of gold lace on each sleeve. President Thomas Pellett (1671–1744) probably introduced the ceremonial in the 1730s and his portrait by William Hogarth (currently on loan from Tate, in the RCP Osler Room) is one of the earliest depictions of the gown. The robe itself is handed down to each president and a new one is made only when the gown has become too fragile to be used. 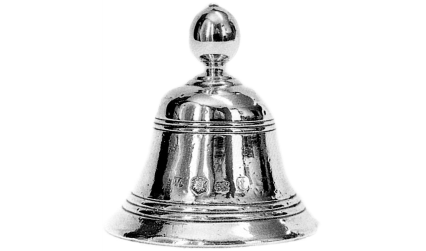 Silver table bell made in London in 1636

Eminent 17th century fellow Baldwin Hamey (1600–76) used a silver table bell to bring silence to comitia during his time as registrar and presented it to the RCP on his retirement in 1655. The bell is still used by the registrar today and its Latin inscription declares that the notes of the bell would always recall Hamey’s voice in the College.

In 1672 Hamey established a trust to present every fellow attending comitia with a pair of gloves to the value of two shillings and sixpence. In 1711 several fellows complained that the gloves given were not worth 2s 6d and an alternative presentation of money or two pairs of gloves was established. A 10 pence piece is presented today – the modern equivalent of the original coins.

Hamey’s final act of generosity was to establish a short lived tradition presenting the new president with a personal gift of silver weighing 60 oz at the time of his election – a practice dropped after the 18th century. 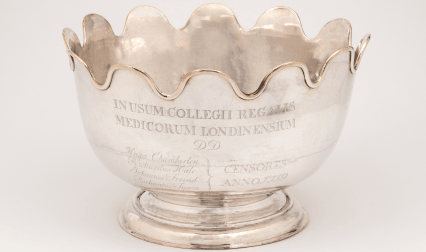 The fellows attending the RCP on College day can still vote by placing their ballot paper in a silver punch bowl given to the RCP in 1719 by the Censors for this purpose. These votes are added to the votes previously collected by ERS. Once the votes have been counted and the result announced though, the current president remains in office for a while longer, to enable a planned handover.

Usually, the formal handover takes place in July, at last new fellows’ admission ceremony of the year. In 2018, as part of the RCP's 500th birthday celebrations, this took place in September, to coincide with the anniversary of the founding charter. At the ceremony, the robe is removed from the former president, and used to gown the new incumbent. The caduceus is handed over and the new president ‘gives faith’ to the fellows in words prescribed in RCP byelaw 140. The bedell ends the ceremony by lifting the mace from the velvet cushion and leads the new president and officers in procession out of the Dorchester Library.

(This post was updated in 2018 with information about the RCP500 celebrations.)