For International Women’s Day 2019, Aiysha Sheth, a recent intern from the Queen Mary University of London history BA course, reflects on the work she undertook here investigating women in the library, archive and museum collections.

As my time at the Royal College of Physicians (RCP) museum draws to an end, I’m a little sad to say goodbye, but my time here has been most insightful. The exhibition ‘This Vexed Question’: 500 years of women in medicine only highlighted how very little of the history of women in medicine has been permanently showcased at the RCP. Going through visitor’s feedback on the exhibition made me realised that many others like myself wished to see more history on women at the RCP permanently displayed. For my placement, I decided to create a new display on the ‘female firsts’ at the RCP, but this proved to be a lot more difficult than I anticipated.

Before I began working on the display, I assumed that the reason why there was such little information displayed on the women member and fellows of the RCP, was because of the hidden nature of women’s work in medicine. It wasn’t until 1909 that the RCP allowed women to join the College as members. That very same year, Ivy Woodward became the first women member of the RCP. Given that women had now formally been recognised by the College, I immediately assumed that from here onwards, the history of women in medicine would be more accessible.

This is of course being an over simplified way of thinking. In the early twentieth century, women members and fellows of the RCP were few and far between. It wasn’t until 1935 that the RCP got its first female fellow, Dr Helen Mackay. Helen made the landmark discovery that iron deficiency was a major cause of anaemia in infants. In 1919, she became the first female house physician and surgeon at Queen’s Hospital for Children in Hackney Road where she conducted ground-breaking research into rickets and anaemia, and their link to dietary deficiency. Her research was ground-breaking and transformed our understanding of how rickets and anaemia are linked to dietary deficiency. More than 70 years after her studies were conducted, EU legislation dictates that all manufacturers of infant formula milk must add supplementary iron to their products. 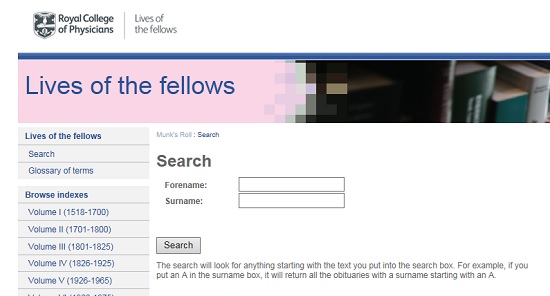 While Woodward and Mackay are relatively well known, especially after the exhibition, I found that we didn’t even know who the first woman of colour fellow was at the RCP. I began by searching through history books on the RCP. This however proved to be of little help. Aside from the history of the College and their attitudes towards women, there was limited information on the female firsts let alone the first women of colour. I then searched through the online catalogues looking for anything which would be useful for my research. I desperately tried searching even the vaguest of terms, such as ‘women’ or common names but the archives were also of little help. What became apparent is that even though the College allowed women to sit the entrance exam, it did not change its stance completely towards women until the middle of the twentieth century.

If I wanted to find the first women of colour fellow I had to start from scratch. I took to Munk’s Roll – a biographical resource about the lives of the RCP Fellows started in 1825 by William Munk (1816-1898). In the RCP’s reading room, I used the published 11-volume book that contains the names of every single fellow since that time. Given that Ivy was admitted in 1909, I began my search from the fourth volume. After patiently scrolling through each name, I finally found the first women of colour fellow: Sujata Chaudhuri (b.1901). Chauduri was professor of medicine and first physician at Lady Hardinge Medical College in New Delhi. From 1936 to 1950 she worked for the Women’s Medical Service of India. She organised rural medical services and family centres in villages around Delhi and in the slums of the city from 1951 to 1960, and was an organiser of the All India Women’s Reserve Medical Unit. During the Second World War, she organised medical welfare projects during the Bengal famine.

Though Munk’s Roll provided a great starting point, there was no photo of Sujata. A search through the archive registers provided no more information. In a last desperate attempt, I emailed the schools and hospital Sujata worked at in India asking if they could provide any photographs. But sadly, I failed to hear back from them. My efforts were not all in vain. Whilst searching Munk’s Roll, I came across some outstanding women whose lifetime of work made lasting contributions in the field of medicine. Zahira Abdin (1917-2002) was the first Egyptian women to become a member and later a fellow. She identified streptococcal infections as a cause of rheumatic heart disease in children in her community. She conducted a serious of follow up care programs across Egypt to help reduce the cases of rheumatic heart disease in Egypt. Less than two decades later, the incidence of fatalities from rheumatic heart disease had dropped from 47 per cent to less than three per cent. The chair of social paediatrics was established in the Aburreesh Children's Hospital, Kasr-al-Aini, in recognition of her work.

My research in trying to find some of the ‘female firsts’ certainly proved challenging but I learnt that the way we collect and gather information on the women members of the RCP plays an important role in how they are remembered. What ways do you think the RCP could help retain the history and legacy of its members?

I am an undergraduate history student at Queen Mary University of London. I am particularly interested I’m Middle Eastern and Ottoman History. In my spare I love to be creative! I make creative instillations and costumes.