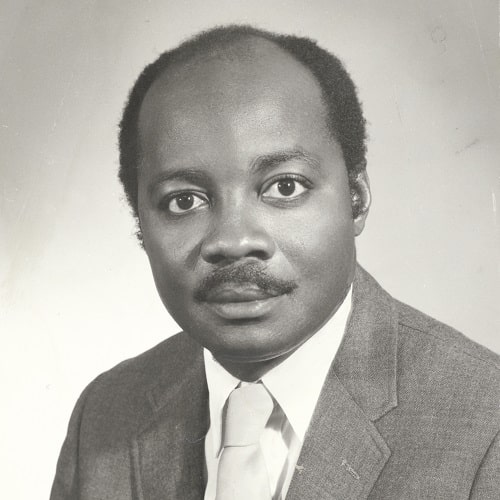 Described in the RCP’s Inspiring physicians as gregarious, dapper and outgoing, a man who once played cricket for the Nigerian national team, Babatunde Kwaku Adadevoh (1933 - 1997) was a physician who had a busy and successful medical career. He was an endocrinologist and chemical pathologist, a researcher and an adviser to major international organisations, including the World Health Organization. He worked in Nigeria in the years following the country’s independence, helping to improve the health of the population.

Adadevoh began his medical studies at University College Ibadan and then the University of Birmingham, qualifying in 1959. His association with the Royal College of Physicians (RCP) also began that same year when he passed the joint examination of the Royal College of Surgeons of England (RCS) and the RCP to become MRCS LRCP (member of the RCS and licentiate of the RCP). Early practice was in Birmingham at the General Hospital and the Queen Elizabeth Hospital before a move to London took him to the Royal Postgraduate Medical School and the Hammersmith Hospital.

Between 1962 and 1964 he spent time in the USA, a research fellow at the renowned Harvard Medical School and the Massachusetts General Hospital before returning to Lagos to become lecturer and then senior lecturer in medicine at the University of Lagos shortly after Nigeria gained independence in 1960 and only two years after the University had been founded.  This during a time of civil war and political unrest for the country.

Following his appointment as professor of chemical pathology at the University of Ibadan (1968) Adadevoh went on to direct a research and training programme in reproductive biomedicine with grants from the Population Council, the World Health Organization and others. An example of the research he was doing at this time can be seen in his typewritten report Application of in vitro radioisotope techniques in studies on the endocrine status of the Nigerian, dated January 1973.

By 1976, he had become the first director of medical research and secretary to the Medical Research Council of Nigeria (renamed the Nigerian Institute of Medical Research (NIMR) in 1993) and then in November 1978, he became vice-chancellor of the University of Lagos.

Other appointments included professor of chemical pathology at the relatively young College of Medical Sciences at the University of Maiduguri, Nigeria (1981). He was the first secretary to the Nigerian Medical Council Board in Physic (Medicine), the forerunner of the National Postgraduate Medical College of Nigeria, which introduced the fellowship programme of specialisation for Nigerian doctors in internal medicine.

He was widely travelled and, as a captivating and erudite speaker, was in high demand nationally and internationally. He was also an expert consultant and adviser in various capacities to many organisations:

Throughout his career, Adadevoh made numerous contributions as an author and editor. He published research on clinical topics, healthcare systems, family planning and resources for education and training in major journals around the World. Unsurprisingly, much of his research focussed on how particular disorders affected Nigerians - lactase deficiency, serum copper levels, insulin levels and lactose intolerance as well as sickle cell anaemia and Sheehan’s syndrome.  His books included Sub-fertility and infertility in Africa (Ibadan: Caxton Press, West Africa, c.1974) and The abnormal haemoglobins, reproduction and family planning (Lagos: Educational Professional & Scientific Publications, 1985). He was also the first editor-in-chief of the Nigerian Journal of Medical Sciences.

Having successfully gained the RCP’s licence in 1959, he become a member in 1961 and was awarded fellowship in 1975. He was also a fellow of the Royal College of Pathologists, the West African College of Physicians and the Nigerian Academy of Science. He died on 5 October 1997. He had married Deborah Regina McIntosh in 1956. One of his four children was Ameyo Stella Adadevoh, the doctor who prevented the spread of ebola in Nigeria but who died doing so.

Sources used in writing this blog

To celebrate, the RCP are sharing stories and achievements of black health and care workers like Adadevoh. Keep a look out on the RCP London and RCP Museum’s social media accounts as we highlight stories of inspiring black physicians from the past and today.