Euclid of Alexandria  was one of the most important and popular mathematical authors in 17th century libraries. Euclid was a Greek mathematician who wrote his master work Elements of geometry around the year 300 BC.

Elements of geometry was published many times in Europe in the 16th and 17th centuries, and was studied by almost everyone learning the science of mathematics. It begins with the simplest parts of geometry: a point and a straight line. Over 13 chapters it explores geometry (moving from rectangles and squares, through circles and other figures to three dimensional shapes including cones and cylinders) and number theory including prime numbers. Diagrams are used to illustrate and explain the mathematical principles described in the text.

Though it may seem surprising in an age of hyper-specialisation, RCP fellows of the past were often very interested in mathematics, and there are many mathematical books in the RCP library. 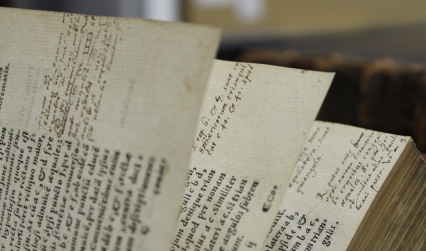 The Reading Euclid project is culminating in Seeing Euclid, a networked exhibition of Euclidean texts across the UK, including at the Bodleian Library and the RCP.

Students and scholars of the past weren’t squeamish about writing in their books: many volumes abound in notes, comments, diagrams and other annotations that show some of the ways in which people engaged and grappled with the text. Others may have left a name, or an armorial stamp on a book binding, which help us to piece together who owned the book, if not what they thought about it. 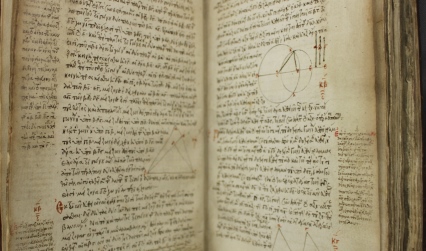 Two display cases in the Lasdun Hall of the RCP display five editions of Euclid’s works alongside the Marquis of Dorchester’s library catalogue, other early mathematical books from the RCP collections, and a portrait of RCP physician Sir Charles Scarburgh. 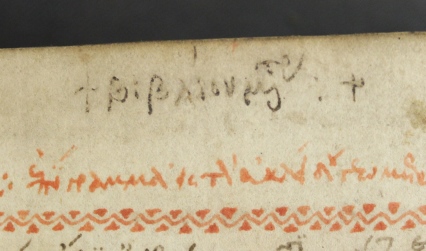 Euclid in the library

The oldest copy of Euclid’s works in the RCP library is a manuscript (handwritten) copy in Greek made at some point during the 15th century. This version of Euclid’s works was originally edited by the Greek mathematician Theon of Alexandria (c335–405 AD). Euclid’s work was copied and recopied many times over several centuries, in the original Greek and in many other languages. We don’t know who owned this particular manuscript, or who gave it to the RCP. However, someone has written ‘biblion mou’ (‘my book’ in Greek) at the top of the first page, but not left their name. 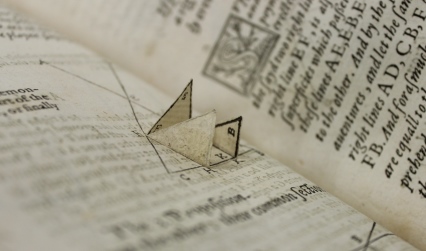 A 16th century reader left notes in Latin in the margins of one book in very small, very neat handwriting. The book is a commentary on Euclid’s work by the French map-maker and mathematician Oronce Fine (1494–1555). Fine gave examples to explain the first six of Euclid’s thirteen chapters, and like the reader’s notes, Fine’s commentary was written in Latin, the universal language of educated people in Europe at the time. Sadly, we don’t know who wrote these notes because they didn’t sign their name. 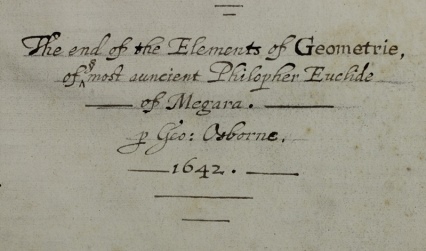 The first English translation of Euclid was published in 1570. This edition also had unusual folding paper diagrams to illustrate the chapter on three-dimensional geometry. In 1642 George Osborne, a mathematician from Hull, owned this book. The last two pages of the book were missing, and he copied them out by hand to fill in the gap. In 1649, Joseph Osborne, possibly George’s son, recorded that the book was worth 40 shillings (2 pounds), a fair price for a book of this size. 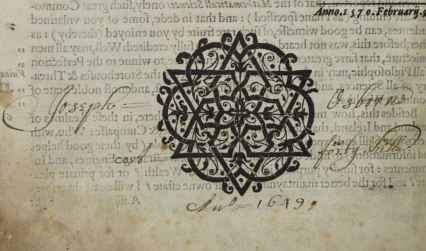 It’s fairly common to find coats of arms stamped onto the covers of early books. Often, the arms can be identified, and provide useful information about who owned the book. However, armorial bindings can sometimes raise more questions than they answer. 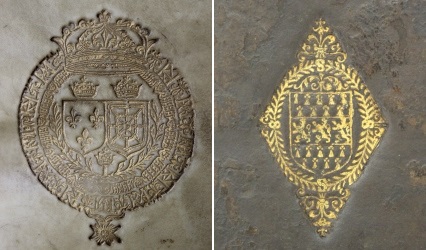 A large, thin book in a vellum binding – David Saint-Clair’s Pro Archimede et Euclide Dikaiologia (1622) – is stamped in gold with the coat of arms of France: three fleur de lys on the left, and a double cross on the right.  This doesn’t mean that the king of France owned the book. It was likely a mark of loyalty and patriotism by an owner, a reference to the book's dedicatee, Lord Chancellor of France Nicholas Brulart, or perhaps connected to the book’s printer, Pierre Chevalier, who often used the arms on the title pages of his books.

A copy of the first edition in Arabic of Euclid’s elements (printed in Rome in 1594) is also stamped with a coat of arms. These arms show ermine on a fess three lions rampant, but as they are not in colour, the precise identity cannot be established. The owner has been suggested as John Blythe of Clifford’s Inn, but it’s not clear if he had an interest in maths or in the Arabic language. This book was one of those rescued from the RCP buildings during the Great Fire of London, 1666. 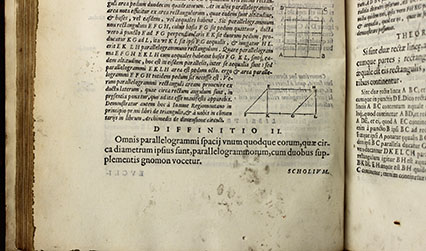 Cats are not known for their mathematical prowess, but a furry-footed feline has certainly inspected one of the RCP books. It’s unlikely that the owner of these dirty paw prints was particularly interested in Euclid’s thoughts about parallelograms. The presence of these grubby marks reminds us that the books preserved in the RCP library and elsewhere have had long and varied lives, and that they have not always been treated with the reverence we might expect.

Until Friday 29 June, two display cases in the RCP Lasdun Hall will display mathematical works from the RCP library collections, as part of Seeing Euclid, a networked exhibition of Euclidean texts across the UK.