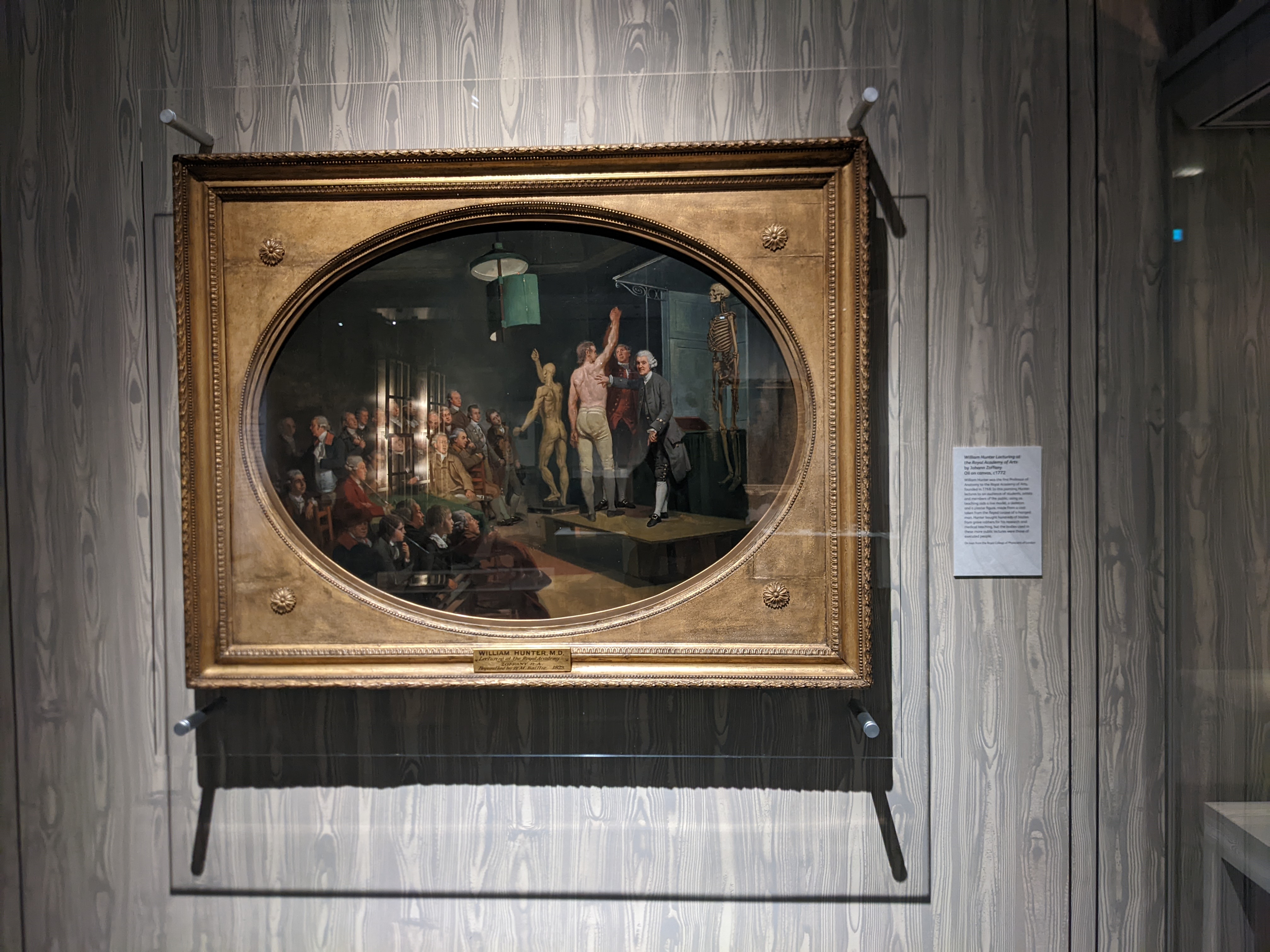 The RCP Museum has loaned two key artworks from the collection to feature in National Museums Scotland’s (NMS’) major exhibition, ‘Anatomy: a matter of death and life’. Edinburgh’s ‘must-see exhibition’ (The Times), charts a 500-year history of anatomical study in art and science.

After years of planning, and conservation funded by NMS, the RCP Museum was delighted to loan out its portrait of Scottish born anatomist, William Hunter by Johan Zoffany to this groundbreaking anatomy exhibition. The painting epitomises the link between art and science in the 18th century; it also relates to the controversial, and sometimes criminal, history of anatomists procuring bodies for dissection.  William Hunter was the professor of anatomy at the Royal Academy of Arts, a surgeon and a royal midwife.

As described by NMS’ exhibition label:

‘In this painting, Hunter lectures to an audience of students, artists and members of the public, using as teaching aids a live model, a skeleton and a plaster cast taken from the flayed corpse of a hanged man. Hunter bought hundreds of bodies from grave robbers for his research and medical teaching, but the bodies used in these more public lectures were those of executed people.’

The Hunter painting is one of our most significant paintings – since its donation to the RCP in 1825, it has been exhibited throughout the UK and abroad, and extensively studied by scholars and art historians.

The second artwork loaned to the exhibition is of the Leiden anatomical theatre by Willem van Swanenburg, after Jan Cornelius Woudanus, printed in around 1610. The print has been part of the RCP’s medical prints collection since at least 1867. As well as displaying the print itself, the NMS exhibition features a blown-up wall graphic and immersive anatomical theatre set inspired by the print. Anatomical theatres were also used for dissecting animals and were places to learn from skeletons and preserved specimens. Despite the use of artistic licence and motifs relating to mortality, the print is thought to be a largely accurate representation of the Leiden anatomical theatre.

In contrast to the unethical and sometimes criminal procurement of bodies from 2 centuries ago, today very strict legislation ensures that bodies used are acquired with proper consent through donation. The exhibition concludes with an enlightening video dialogue between a present-day professor of anatomy, a medical student and a living donor. The talking heads share with us the enormous respect they have for the gift of body donation to the advancement of science. If you’re lucky enough to be in Edinburgh between now and the end of October, do see this fascinating exhibition and spot the RCP artworks, enjoyed by 11,000 visitors in the first month of opening alone.

National Museums Scotland’s ‘Anatomy: a matter of death and life’ runs until 30 October 2022