A translation of the works of Galen, published in 1519, the year after the RCP was founded is the curator’s curiosity on display until 14 September 2018. 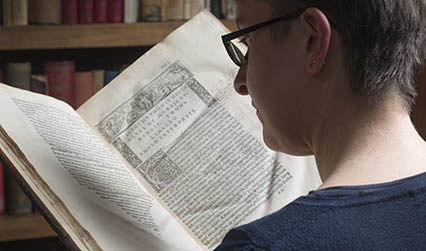 The version on display was translated from the original Greek into Latin – the common language of scholarship at the time – by Thomas Linacre (c.1460–1524), who was the first president of the Royal College of Physicians (RCP). This book was published in 1519: 1 year after Linacre had helped to secure the founding charter of the RCP from King Henry VIII.

It is one of several translations that Linacre made of Galen’s works. Linacre was concerned that medical practice was being hindered by a poor understanding of the ancient authors, thought to be authorities on their subjects. He made new translations of many texts, to try to prevent misunderstanding caused by poor translations in the past. His first appeared in 1517, and he continued until his death in 1524. 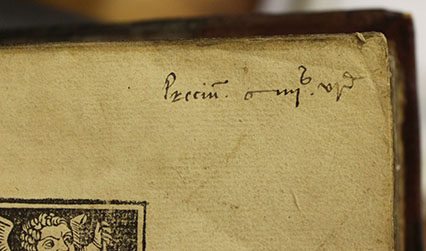 As with many early printed books, there is evidence in this copy of Galen of some of the people who owned and used it in the past. At the top of the title is a note of the book’s price: 4 shillings and 6 pence. This was an appropriate sum for a large book that was intended for a learned audience.

On the title page is a short inscription in Latin: ‘Liber Joa[n]nis Toker Collegij Card. in Oxon.’ This means ‘The book of John Toker of Cardinal College, Oxford’.

Cardinal College was the former name for Christ Church, Oxford. The records of the University of Oxford reveal that John Toker, also known as John Tucker came from Cornwall. He a fellow of Exeter College, Oxford, 1521–26, and one of the first canons of (ie a clergyman at) Cardinal College in 1529-30. He took his bachelor of medicine degree on 14 May 1530 and his doctor of medicine on 13 July 1538. He became personal physician to Thomas Cranmer, Archbishop of Canterbury.  Some of Toker’s own books ended up in Cranmer’s personal library, which is now preserved at the British Library. There are notes and annotations in Latin and Greek on several of the pages, which are likely to have been added by Toker. 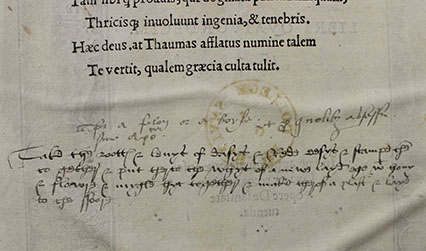 On the back of the title page, an anonymous reader has written an English recipe for healing a boil, sore or abcess, also known at the time as a ‘felon’.

The handwriting, spelling and vocabulary suggest that this recipe was added in the early 16th century, but it’s hard to match writing in English to Toker’s notes in Latin in Greek, so we can’t be certain that it was him.  Translated into modern English, it roughly reads:

Take the roots and leaves of daisies and red easies [possibly a common name for a plant?] and stamp them together and add the white of a newly-laid egg with honey and flour and mingle it together and make a plaster from it and put it on the sore.

It’s quite common to find recipes written into medical books. There’s a recipe ‘to kill wormes’ in a 15th century plague book in the library, for example. 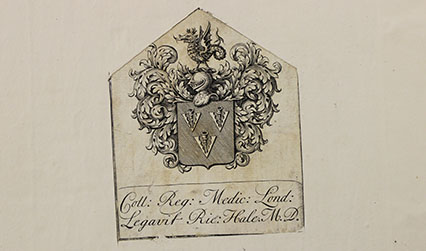 We don’t know who owned the book after Toker. It was given to the RCP in 1728 in the will of physician Richard Hale. Hale’s bookplate is pasted inside the front cover.

Visit the RCP and see the Linacre’s Galen translation displayed in the Treasures Room until 14 September 2018.

We use cookies on this website. By using this site, you agree that we may store and access cookies on your device. Find out more.
Date
17 August 2018
by
Katie Birkwood ,
Rare books and special collections librarian