Skip to main content
Pharmacological preparations: evidence from the RCP library and archives

RCP fellows’ interests in pharmacology over several centuries are reflected in the contents of the RCP library: herbals, books of materia medica, and pharmacopoeias from across Europe are a significant strength of the collection. One of the earliest is the 1499 German Ortus sanitatis­, or ‘garden of health’, which describes the properties and uses of medical materials including animals, birds, fish, plants, rocks, minerals and precious stones alongside woodcut illustrations of each.

Later titles include several Renaissance editions and commentaries on the herbal by the 1st-century AD Greek botanist Pedanius Dioscorides, as well as some of the earliest printed English herbals, published in the 16th century. A large number of 19th-century herbals, formularies and pharmacopoeias have been digitised and are available for free online. 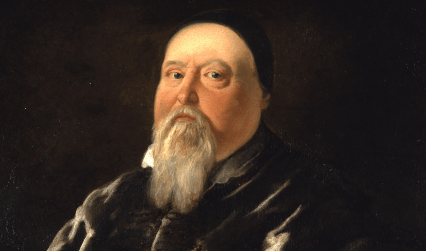 A portrait displayed in the Lasdun Hall of the main RCP building depicts the RCP fellow Sir Theodore de Mayerne (1573–1655), one of the leading advocates of the use of chemical – rather than herbal or animal-based – remedies in the early 17th century. The ideas of the so-called ‘iatrochemists’ were enormously controversial at the time, not least because they contradicted the long-held beliefs of physicians who carefully followed the teachings recommendations of the 2nd-century AD Greek physician Claudius Galen.

The ideas of the so-called ‘iatrochemists’ were enormously controversial at the time, not least because they contradicted the long-held beliefs of physicians. 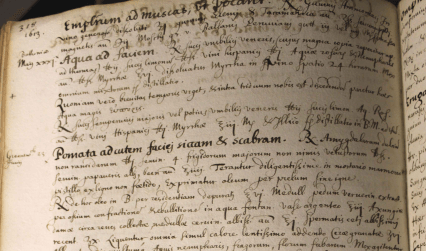 Cosmetics for the use of Queen Anne from Sir Theodore Mayerne's original record book of cases and consultations, 17th century

Mayerne introduced the use of mercury chloride (calomel) into medical practice, where it was employed mostly as a laxative and disinfectant. Mayerne was a lecturer in anatomy and pharmacy in Paris before being called back to England by King James VI and I. On Mayerne’s arrival, the king honoured him with a private audience, appointed him first physician to himself and also to the queen, Anne of Denmark. In the archives we have Mayerne’s casebook listing ingredients for treatments and cosmetic preparations including ones specially created for the queen.

In 1616, Mayerne was unanimously elected a fellow of the College and in 1618 he was deputed to write the dedication of the first Pharmacopoeia londinensis to the king. The Pharmacopoeia londinensis was written by the College and set out the precise prescriptions that apothecaries were allowed to dispense to patients, as well as defining the standards of the ingredients that could be used. It was the forerunner of the modern British national formulary. The first edition contained almost entirely traditional Galenist remedies, but ended with two short sections of chemical medicines, which could be used to support the ‘wisdom of the old masters’.

The Pharmacopoeia londinensis was revised many times over the following centuries, with new recipes added and discredited ones removed. The final edition appeared in 1851. The library holds all editions of the title, many of which are annotated, as well as dozens of editions of Nicholas Culpeper’s (1616–1654) English translation of the work.

Pharmaceutical medicine was the RCP specialty spotlight for April 2017.