Skip to main content
Penny Reds in the archives: a stamp collector’s surprise

Documents in our archives are of interest for all sorts of reasons. The stamps on the outside of envelopes and packages are often overlooked, but they have their own fascination, too.

Working in a library that’s attached to a museum and archive can throw up a few surprises, especially if you love stamps. A few months ago I was passing through the library when I noticed a couple of my colleagues admiring a beautiful grave rubbing from a memorial stone, and as the rubbing was gently folded up due to its delicate condition I was extremely surprised to find out the rubbing had been sent through the post and was adorned with two Penny Red postage stamps. 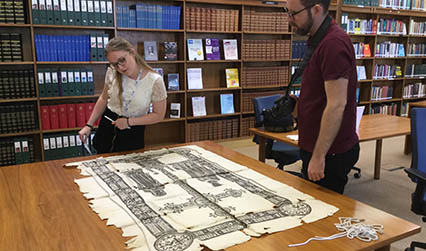 First issued in 1841, the Penny Red succeeded the Penny Black (1840). The colour of the stamp was changed from black to red because of difficulty in seeing a cancellation mark on the Penny Black. Each stamp was given a unique corner letter AA, AB etc., to easily identify its position on the plate. The stamps on the grave rubbing the stamps show the letters AK, indicating the eleventh column of the top row. 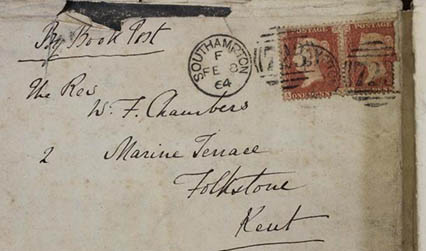 Penny Red stamps on the reverse of a rubbing from the memorial stone of William Frederick Chambers and Francis Elizabeth Adam. MS5981/10.

The Penny Red was Great Britain's longest-running stamp. From February 1841 to the end of November 1879 approximately 21 billion were issued. Until 1854 the stamp remained imperforate, meaning that individual stamps were cut out using a knife or scissors, rather than being torn from the sheet along pre-perforated lines. From 1858 the Penny Reds were given letters in all four corners, so the presence of perforations and two letters dates these stamps as being from between 1854 and 1857.

‘By book post’ is written above the address and next to the two stamps. At the time, this was a standard rate of two pennies. 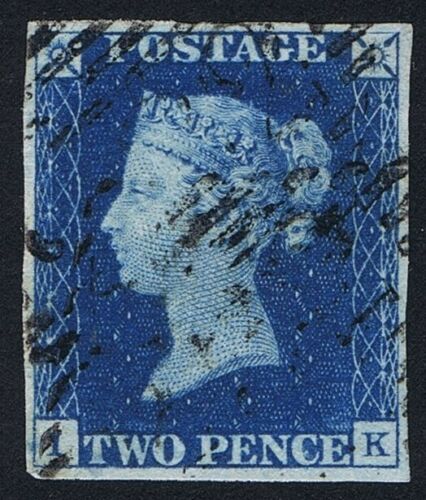 Stamp from the collection of Ian Markham 2p blue 1840

The cancellation is from Southampton. These numeral cancellations (or postmarks) were known as obliterators as they made the stamps impossible to reuse, and they sometimes left the stamp unrecognisable. The numeral post marks were issued to replace the Maltese cross cancellation which was introduced with the Penny Black. England's obliterators were oval, Scotland's rectangular and Ireland's was in the form of a diamond, on this cover I can see the oval 723 obliterator cancelation next to the circular stamp with Southampton FE 8 64, giving the postal date of February 8, 1864.

The Penny Reds on the grave rubbing are not in the best of condition, but as a philatelist it’s still a thrill to seem them still attached to a piece of mail with amazing content.

Thank you to our reader Ian Markham for the following information:

The earliest known usage of the Penny Red, according to Allan Oliver's document, is on the 12th Feb 1841 which, along with the later introduction of the Two Pence Rose, accounts for the longer run, in my humble opinion, of the Two Pence Blue. May I suggest that the Two Pence Blue deserves the title of longest running stamp. This stamp was issued on the 8th May 1840, just two days after the Penny Black. When Perkins Bacon &Co lost their contract at the end of 1879, De La Rue took over the printing of all British stamps.

So I reckon that the Two Pence Blue out lasted the Penny Red by about a year and a half.' 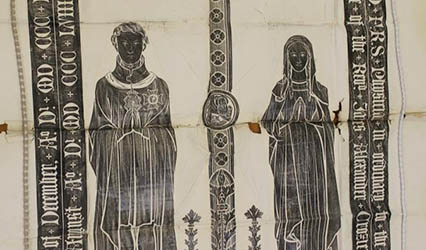 The rubbing itself shows a memorial to physician (William) Frederick Chambers (1786–1855) and his youngest daughter Frances Elizabeth Alexander (née Chambers) (1824 or 1825–1858). The style is neo-gothic, harking back to medieval brasses. We don’t know who made and sent the rubbing, but it was addressed to a Reverend WF Chambers in Kent, presumably Frederic Chambers’ son Willie.

Chambers was an extremely successful London physician, working at St George’s Hospital and with a very profitable private practice. In 1836 he was appointed physician in ordinary to Queen Adelaide, wife of King William IV. After his death, Chambers was described as not being a ‘sparkling talent’, but rather as having good wisdom and judgement.  He kept copious carefully-indexed case notes and recording his consultations with patients, which are now in the library of the Royal Society of Medicine.

We know that the rubbing was taken from a memorial stone, ‘at Lymington’, but we haven’t yet been able to find out at which church or other location is stands. In his last years, Chambers lived at Hordle House, Hampshire, near Lymington, so the memorial might be in Lymington itself, or at Hordle. If anyone in the area has further information, or has seen the memorial itself we’d be delighted to learn more!

Documents from the RCP archives are catalogued online, and available for research by appointment.