On 3 April 1637, at a meeting of the Royal College of Physicians censors, fellow Dr Robert Fludd informed colleagues of his recent investigations into the controversial ‘antimoniall cups ... solde publiquely in Gunpowder Alley, at the signe of the Magpie’.

Antimony is a highly toxic metallic element which, when ingested, produces symptoms similar to arsenic poisoning. With illness thought to be caused by an imbalance of 'humours' in the body, violent purges were a common 17th century prescription to restore balance, and a draft of wine drunk from a cup made from antimony would cause the necessary vomit in an unfortunate patient. 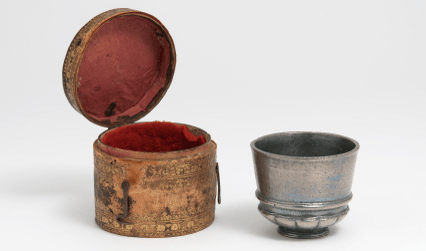 A brief look at the history of antimony's medicinal use reveals a controversial and intriguing story. Roman physicians prescribed vinum stibiatum made from wine left in cups made from antimony but the cups then disappear from the record until the 17th century when antimony had come to be regarded by some as a universal medicine with powerful health-giving properties.

The RCP museum holds two exceptionally rare early 17th century antimony cups, both of which retain their original gold-tooled leather cases – necessary to protect the cup from damage but also the handler from exposure to the toxic metal within. One of the RCP cups is broken at the rim; the crystalline structure of pure antimony makes it brittle and explains why only six cups appear to survive in the UK today, all held by London museums. 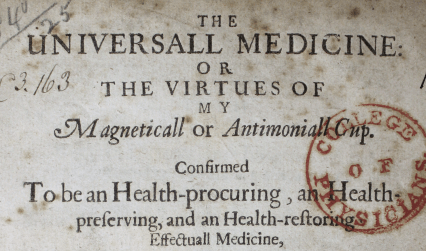 The universall medicine or the virtues of my magneticall or antimoniall cup, John Evans, published London, 1642

The colourful Welsh-born quack, astrologer and magician John Evans (c.1594–659) engaged in a brisk trade in antimony cups from his shop in Gunpowder Alley. He was censured by the RCP after the publication of his Universal medicine, or the virtues of the antimoniall cup in 1634, but he continued to trade, and published further editions of the same promotional book. The RCP cups were probably bought by eminent RCP fellow Baldwin Hamey from Evans’ shop in the 1630s. Instructions with the cups ask the user to:

Fill it with White wine and put a clove or two in it, and a little mace, then let it stand all Night and ye Next morning drink the Wine and it will taste of nothing but wine, and will work safely first by a Vomit, and then by Stools also… And accordingly as you would have it work, either gently or strong, You may put ye wine in Sooner or Later at Night.

If the wine was highly acidic, too much antimony was oxidised and the resulting draft could become lethal. Fludd went on to list the effects of cup in the RCP annals:

Sir Nathanial Kitch died of a vomit made by the antimoniall, the last summer. … The Lady Ayme Blunt died of the same medicine in Charter-house yard the same summer.

Antimony treatment provoked bitter disagreement amongst 17th century practitioners but by 1678, over 106 standard remedies contained antimony of various sorts and it was not until the 19th century that antimony finally ceased to be a standard treatment in the family medicine chest.

The RCP’s antimony cup was on display in 'This bewitching poison': alcohol and the Royal College of Physicians, 13 January - 28 July 2014.