Skip to main content
‘A native of the icy regions’: a historical view of reindeer

To help get into the festive spirit, today we’ve looked in some rare books from the RCP library and read about some festive animals.

We all know that reindeer (Rangifer tarandus) can’t really fly, but many a child (and adult, too) looks skywards on Christmas Eve to see if they can catch a glimpse of Santa and his sleigh whizzing by overhead. There’s even an online Santa-tracker to help plot his course. Even without the power of flight, this humble northern animal has several remarkable features.

More rapid than eagles his coursers they came, and he whistled, and shouted, and call'd them by name: ‘Now! Dasher, now! Dancer, now! Prancer and Vixen, on! Comet, on! Cupid, on! Donder and Blitzen’

Despite the animal’s natural habitat being the remote northern regions, one of the library’s oldest books of natural history and material medica, the 1499 Ortus sanitatis, lists two possible entries for reindeer: one under the name Rangifer or Rosurella and the other as Tarandrus. The former is said to be like a large deer, which can run very quickly and lives in the regions near the North Pole. The latter is an animal the size of an ox that changes colour. Unlike for many of the land animals, birds, fish and plants it includes, the Ortus sanitatis does not mention any medicinal uses for either of these beasts. It does mention that the Rangifer has horns that it uses in fights, and that the Tarandrus animal has branching horns. The accompanying woodcuts show that these are, apparently, rather different in scope. 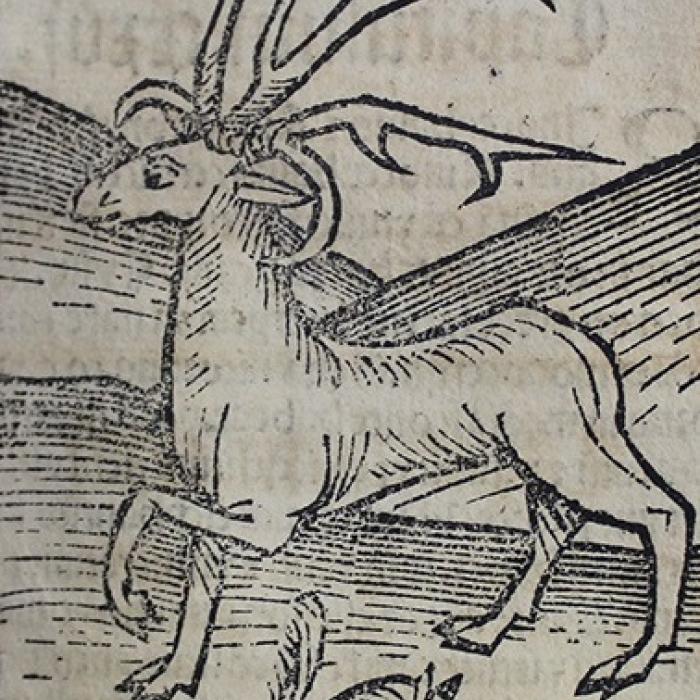 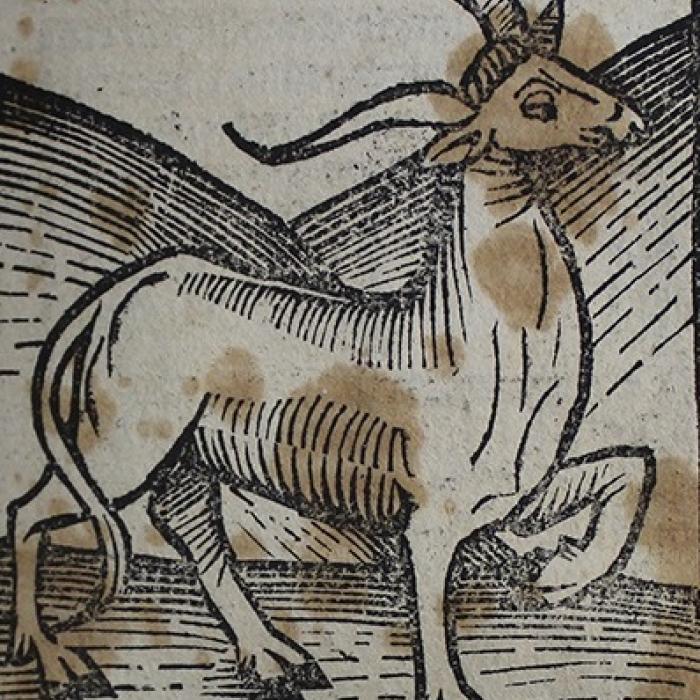 In 1551, Gessner reported that the animal variously known as, Rangifer, Renschieron, Ranglier and by other names lives in the north of Scandinavia, and that the people there rely on the animals and make all kinds of dairy products from their milk. In the second edition, published in 1553, he includes this animal as part of the section on deer, giving it the additional name of Cervus tarundus, and including a somewhat more familiar illustration. He also says that reindeer used to be known in the Mazovia region of Poland, but that few now remain there.

The illustrated General history of quadrupeds, produced in several editions by Ralph Beilby (1744–1817) and Thomas Bewick (1753–1828) between 1790 and 1798, devotes several pages to the ‘Rein-deer’,  which it calls an ‘extraordinary animal … a native of the icy regions of the north’.

Like Gessner, Beilby’s account emphasises the close relationship between reindeer and the humans with whom they live, who, he says ‘would find it impossible to subsist among their snowy mountains without the aid of this most useful creature’ and that ‘innumerable are the uses, the comforts, and advantages, which the poor inhabitants of this dreary climate derive from this animal’. Beilby described the use of the skins for clothing and shelter, and of the milk and flesh for food.

In summer, Beilby reports that the reindeer herders drive their animals up into the mountains to escape the ‘myriads of insects’ – including gnats and gadflies – which swarm to life and trouble the reindeer greatly. When the animals are to be milked, the locals light a large fire of moss so that the smoke will drive away the insects and leave the reindeer in peace.

In winter, the people of Lapland also use the reindeer for transport. Yoked to light sledges by a collar, the reindeer are able, according to Beilby, to travel 30 miles at a stretch. However, it isn’t always easy going: the less tame animals are, it is said, prone to ‘prove refractory … and strike so furiously with their feet, that [the driver’s] only resource is to cover himself with his sledge, upon which the enrage creature vents its fury’.

Sledging accidents aside, the reindeer were then, and are now, an integral part of everyday life in the arctic regions of Europe and not just the (mythical) seasonal visitors we know in the UK. I have, however, found no records of red-nosed reindeer being used for navigational purposes.

If you’re looking for yet more Christmas inspiration, why not try out a festive recipe from our archives?