Gendered advertising is a very current issue, and it has a long history in medicine and pharmacy. Matthew Johnston explores some adverts playing on concepts of motherhood in the Royal Pharmaceutical Society museum collection.

Before medical schools began opening their doors to female students in the latter half of the 1800s, ‘kitchin physic’ was one of the few ways in which women were able to practise medicine that was acceptable in the eyes of men. It’s perhaps unsurprising then that the stereotype of women – mothers in particular – as the primary caregivers in the home is so prevalent, even today.

This stereotype is one that many manufacturers and campaigners have used to their advantage over the years. In the 1800s, advertisements for children’s medicines such as Mrs Winslow’s Soothing Syrup and Steedman’s Soothing Powders (both for teething) often featured an image of a well-to-do woman surrounded by rosy-cheeked children. Testimonials for Mrs Winslow’s Soothing Syrup would also shame mothers into buying the product, implying that they were putting their children at risk by not having a bottle close to hand. In fact it was the preparation itself that had the potential to do harm. It contained alcohol and morphine, resulting in cases of addiction and even death. 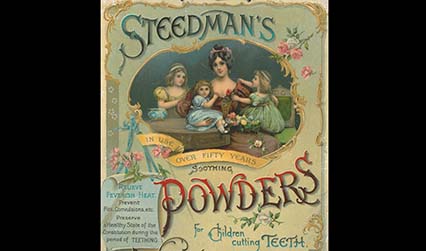 Some companies also produced promotional material in the form of reference books aimed at mothers, advising them on the best ways to prevent and treat common childhood ailments. Often this would involve using the company’s own medicines. Adverts and testimonials for these could be found throughout the publications.

Here, too, guilt was used to persuade mothers to buy brand name medicines, or to rely on their manufacturers for instruction. The cover of the c.1876 edition of Every mother’s book (subtitled The child’s best doctor), produced by the Fennings company, states that:

The OMNISCIENT GOD never intended that nearly half of the babies born in this country should die, as they now do, before they are five years of age. Carelessness, poisonous white Calomel Powders, and a general ignorance of simple safe remedies to cure their peculiar diseases, have been the fatal causes.

The back page advises ‘anxious mothers’ that they can write directly to the company for further confidential advice.

In 1904, John Steedman and Company produced the first edition of their own guide book Hints to mothers on the treatment of their children, claiming inside that:

The greatest of all gifts that the Almighty can bestow upon you is your baby. It is your duty to sacrifice yourself, to give your whole thought to the well being of the charge that is trusted to you.

A range of illnesses are covered in the guides. Many of them are recommended to be treated with Steedman’s Powders, the company’s own product, and the guides also include directions for taking the powders and a caution not to purchase imitation medicines. For more serious conditions, the guides recommend that ‘a medical man should at once be called in’.

Steedman’s ‘Hints to Mothers’ was a popular series, often known simply as ‘the little red book’. It stretched to twenty editions, the last published in 1961, and was also translated into French. 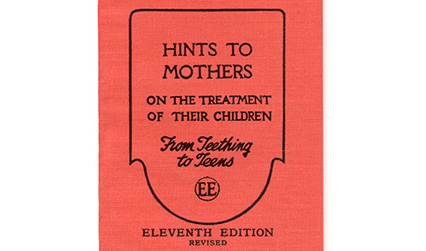 Drug manufacturers aren’t the only companies who have targeted mothers as custodians of family health matters. In the 1980s the National Pharmacy Association ran a successful ‘Ask Your Pharmacist’ campaign, encouraging the public to make use of their local community pharmacist’s expert knowledge of medicines. A series of posters covered a range of topics from summer sun protection to winter colds. One poster, on display in the RCP’s exhibition ‘This Vexed Question’, shows a woman sitting on the floor next to a variety of children’s toys, trying to comfort a crying toddler. The slogan reads ‘Sometimes doing your best for them means admitting you don’t know what to do’. Another features a woman in a supermarket holding a crying child, with the caption ‘You can’t ask a supermarket shelf what it recommends for family health problems’.

This brings us to the present day. Has anything changed? With more media outlets than ever before, whether through print, television and radio, websites or social media, we are exposed to advertising material multiple times a day. Next time you see an advertisement relating to family health matters, take a note of who the target audience is. Are mothers still portrayed as the primary household caregiver?