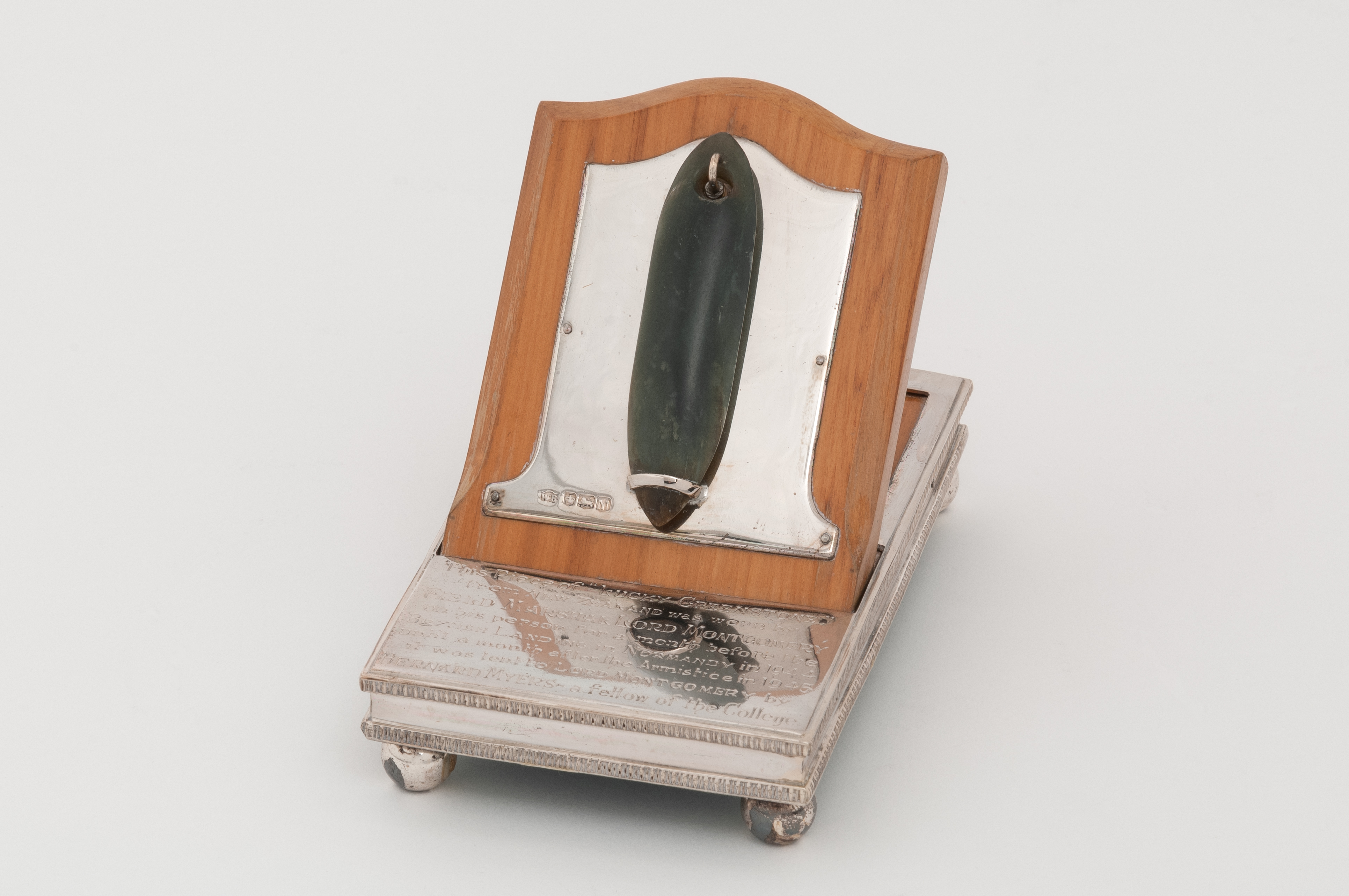 Within the RCP museum's collection is a striking green pendant mounted on a shield. The pendant was worn for good luck by one of the most prominent British Commanders of the Second World War, Field Marshal Montgomery, during the D-Day Normandy Landings in 1944.

'This Piece of "Lucky Greenstone" from New Zealand was worn by Field Marshal Lord Montgomery on his person for a month before the British Landing in Normandy in 1944 until a month after the Armistice in 1945...'

This greenstone therefore witnessed a very significant moment of the 20th century, but what was the history of the amulet before it came to be worn by Montgomery? And how did it end up in a medical museum?

Prior to D-Day, Montgomery was loaned the greenstone by the Aotearoan/ New Zealander paediatrician Bernard Myers (1872-1957), fellow of the RCP. Myers worked between London and Auckland during the Second World War and was a Commissioner for St Johns, and the Red Cross in London.

This ‘Lucky Greenstone’ has been identified by Senior Māori Curator, Dougal Austin - Kāti Māmoe, Kāi Tahu of The Museum of New Zealand Te Papa Tongarewa as being made from nephrite pounamu, amongst the most treasured of materials to Māori. Pounamu is mainly found in the West Coast of the South Island of New Zealand and was worked by Māori into tools, weapons and adornments.

The pounamu’s distinctive shape also suggested to Austin that it could be a kuru, a pendant traditionally worn from the ear. Following the arrival of European settlers, kuru were sometimes made larger in size and worn on a cord around the neck.

The trend for European settlers appreciating Māori forms of pounamu adornment and wearing them continued from the 19th century into the 1950s. Many European-made hei tiki (ornamental neck pendants) of greenstone were machine-made and sold in England as Māori good luck charms during the early 1900s.

In 1954 this amulet was mounted on a shield prior to being donated to the RCP museum by Dr Myers. It is unknown how much Field Marshal Montgomery appreciated the cultural significance of pounamu greenstone to Māori culture. The pendant was however meaningful to Montgomery and was worn by him in the preparations before and during the Normandy D-day landings – a time when the Allied forces needed all the luck they could get.