In February 2013, the British Association for Sexual Health and HIV (BASHH) donated 42 books to the RCP library.

Over the years BASHH and its predecessor organisations developed a unique collection of historical books on venereology, sexually transmitted infections, HIV and sexual health. The donated books cover topics such as the origins and spread of syphilis in Renaissance Europe, pharmaceutical and surgical treatments for venereal diseases, and human sexual behaviour. The earliest is a commentary on the works of Hippocrates by Cristóbal de Vega (Venice, 1571), and the 11 twentieth century titles include the famous 1948 and 1953 Kinsey Reports, Sexual behaviour in the human male and Sexual behaviour in the human female.

Some of the donations were standard works of their day, used by generations of physicians trying to understand syphilis and gonorrhoea. Others are much rarer, with only a handful of copies known to exist. The most notable of these is an 18-page pamphlet written and published by surgeon Peter Clare in 1783, Observations on the prevention and cure of the siphylis [sic] extracted from the works of John Profily, of which there are only two other known copies.

In this pamphlet, Clare uses a dialogue between patient and doctor to summarise the theories and recommendations in John Profily’s 1748 book An easy and exact method of curing the venereal disease. Clare places great store on the importance of prevention of contagion, advising the patient to ‘live chastely and avoid incontinence [ie lack of restraint]’. He goes so far as to say that making a preservative or prophylactic available would ‘be thought an encouragement of vice; and hurt many others, who, in a great measure depend on the cure of this disorder’. If a patient does become infected, Clare recommends the use of an injection of ‘Greek water’ – an invention claimed by John Profily, which was probably a caustic liquid or a solution of heavy metals – into the urethra three times a day, which will lead to cure in 2 or 3 days. 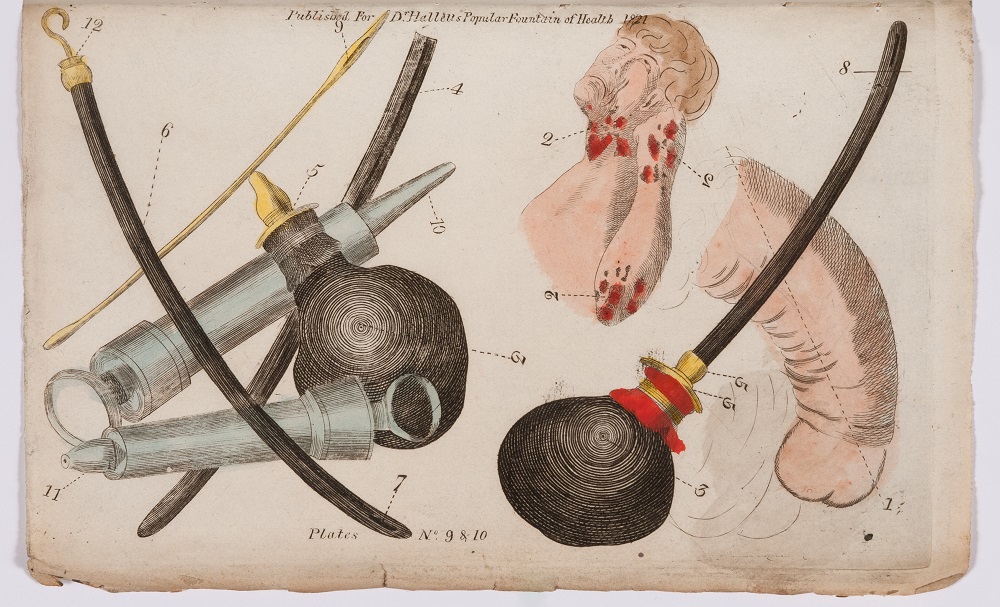 De venereo morbo. The popular fountain of health, or a practical treatise of treatment and cure on the venereal disease. Job Hallett, published London, 1822

Many of the donated books are illustrated. The popular fountain of health, or a practical treatise of treatment and cure on the venereal disease by surgeon Job Hallett is supplemented with 12 copperplate illustrations, rather crudely coloured by hand with ink washes in lurid red and yellow, and sickly pink. The plate shown above includes several pieces of medical equipment: the elastic gum syringe, an elastic gum bougie, a catheter, a silver probe, and other syringes.

The RCP library holds books and resources on a wide spectrum of health-related subjects, ranging from the history of medicine to clinical medicine, via medical ethics, health policy and the medical humanities. The library is open to all and rare books and special collections are available by appointment.