Leprosy, or Hansen’s disease, has affected humans for thousands of years. The term leprosy comes from the Greek word for scale. Hansen was the Norwegian physician who identified the bacteria responsible for the disease in 1873.

The disease can be carried by a range of animals, including armadillos. In the UK, red squirrels have been identified as carriers of the strain of the bacterium which was prevalent prior to the Norman conquest. Red squirrel fur was extensively traded across medieval Europe and this trade is thought to have contributed to the spread of the disease.

Leprosy is caused by the bacillus mycobacterium leprae. It usually starts by damaging nerves close to the skin, leading to discoloured patches with loss of sensation. Infected people usually develop symptoms within 5 years. But it can take up to 20 years to develop. Without successful treatment the disease spreads, causing further nerve damage, especially to eyesight, hands and feet. The loss of sensation leaves the body vulnerable to injury and infection which causes additional damage, such as ulcers, blindness and paralysis. 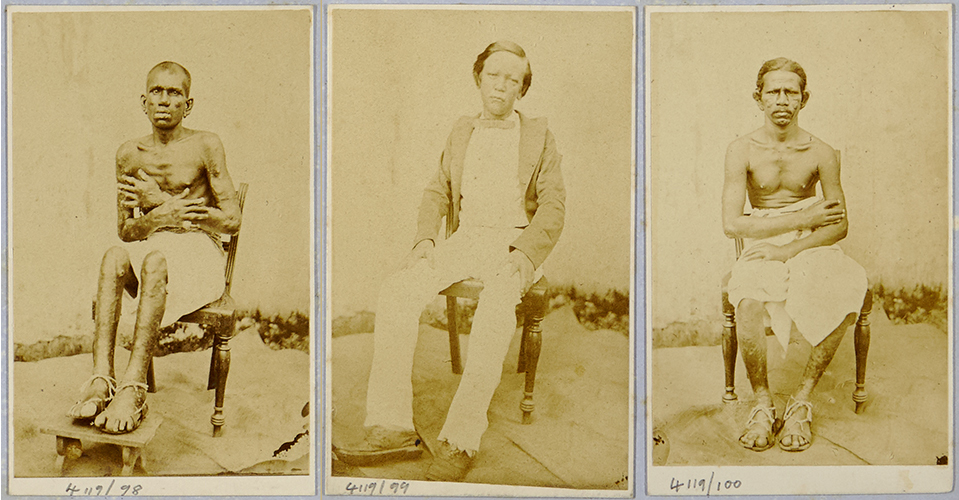 For many centuries, including the 19th century the prevailing public view was that leprosy was contagious, especially via sexual transmission, and hereditary. ‘Lepers’ were usually isolated from their communities, with men and women segregated. The lack of effective treatments allowed the disease to progress unchecked in most patients. The accompanying disfigurements also contributed to the social stigma and prejudice people with the disease encountered.

It is now known that leprosy is spread by moisture droplets passed through the air from someone who has leprosy but has not started treatment. It is not hereditary and is only mildly infectious. You can’t catch it by touching someone. In fact, 95% of people are thought to be naturally immune.

However, immunity can be lowered by poor nutrition, illness or poor living conditions, making infection more likely. A cure was developed in the late 20th century, a multidrug therapy taken daily for 6 to 12 months. Unfortunately, there is no way to reverse the damage done by the disease before treatment. Millions of people, mostly in the developing world, continue to be affected by this disease.

Walker was concerned about the increase of leprosy in the territories that he governed. He suggested to the colonial office that reports should be obtained from all the colonies and collated by some professional body to try to throw light on the disease.

The colonial secretary at that time, the Duke of Newcastle, asked if the Royal College of Physicians would help. They agreed and on 14 June 1862 appointed a Leprosy committee to produce suitable interrogatories (questions). This committee consisted of Drs Arthur Farre, George Rees, Gavin Milroy, Edward Greenhow, and Sir William Gull. Gull was an important figure, both at the Royal College of Physicians and in social circles. In fact the museum collections include his court dress, worn whenever he attended the Royal Court, See a previous post for more details.

The committee compiled a list of detailed questions on how the disease, across 17 sections. The resulting questionnaire was sent by the colonial office to territories across the globe. They received 66 replies over the next year, with numerous additional documents and correspondence. All of the above are held in the archives of the Royal College of Physicians, as an enduring record of the global spread of a widely feared disease.

Draft copy, Abstracts of replies to the interrogatories prepared by the Leprosy Committee of the Royal College of Physicians, 1864 MS4119/232

Only 9 responses suggested the disease was contagious. The committee reviewed all the responses and came to the conclusion that there was no evidence to justify compulsory segregation. All the responses were collated into a single report, published in 1864 by the government. Over 3000 copies were printed.

This report was influential in shaping the treatment of the disease and the rules and regulations under which so-called ‘leper colonies’ were managed, across the globe.

Below are publicly accessible links to a few highlights from this collection.

Abstracts of replies to the interrogatories prepared by the Leprosy Committee of the Royal College of Physicians, HMSO, 1864.

Digitized versions of the complete set of records in this collection are available online, as part of a charged for scientific archives resource.

This post celebrates the launch of Explore Your Archive 2020, an ongoing campaign for public and private organisations across the UK and Ireland to showcase the hidden gems stored in their collections.