If you are already familiar with Sir Thomas Browne (1605–1682) then you are in good company. Virginia Woolf wrote: ‘Few people love the writings of Sir Thomas Browne, but those who do are the salt of the Earth.’

For those of us who were in the dark about this extraordinary man, Sir Thomas Browne was a physician (and fellow of the RCP), a collector and a writer: a real polymath of the 17th century.

He was profoundly curious and spent his lifetime observing the world around him. Browne built a vast collection of artefacts, animal and plant samples, and books. John Evelyn wrote in his diary that Browne’s ‘whole house and garden is a paradise and Cabinet of rarities’. For a while Browne even owned an ostrich, which lived in his garden feeding on his plants so he could observe the motion of its gullet. 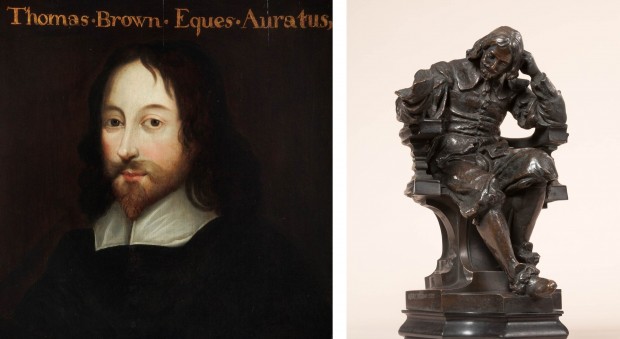 In Norwich, where he lived, he practised medicine, wrote bestselling books, and conducted experiments. Documenting his discoveries, he exchanged letters with correspondents all over Europe in the scientific social networks of the time.

Browne was celebrated for his religious toleration as well as his learning. Religio Medici is perhaps his best-known work. In it, he wrote:

I could never divide myself from any man upon the difference of an opinion, or be angry with his judgment for not agreeing with me in that from which within a few days I should dissent myself.

In a life spanning most of the 17th century, Browne lived through a period in which the world was being remade through:

Practising medicine and performing experiments at home in Norwich, Browne was deeply engaged with these changes; yet at the same time, and like many of his peers, he believed in magic and gave evidence at a witch trial.

He is perhaps best remembered for his literary works. In addition to inspiring authors like Woolf, Samuel Taylor Coleridge, Jorge Luis Borges and many more, he also introduced over 700 words to the English language – including the first recorded uses of the words ‘medical’, ‘coma’, ‘hallucination’ and ‘insecurity’.

Discover more about Browne’s astonishing collection, medical practice and literary legacy in the RCP's upcoming 2017 exhibition, which is being guest-curated by academics from Queen Mary University of London (QMUL). QMUL is working on a project to publish for the first time all of Browne’s printed works and all his manuscript remains.

'A cabinet of rarities': the curious collections of Sir Thomas Browne runs from 30 January to 27 July 2017.