Skip to main content
Green paint and the imperial eagle: a surprising book binding in the Dorchester Library

The rare books in the RCP library collections – some 20,000 titles printed before the year 1900 – are historically important for many reasons. Most obviously, there are the text and images they contain: works like Vesalius’ anatomy of the human body, or William Harvey’s description of the circulation of the blood. But these books are also used for research into intellectual, social and economic history by examining the marks left by the people who used the books: their notes and annotations, and the book bindings that were put on the pages to make the books usable and attractive. 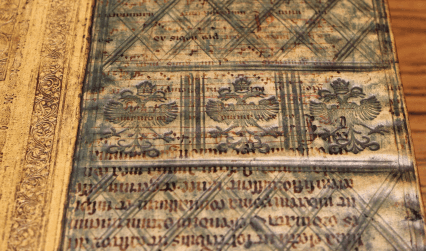 Recently, one particular binding caught my eye. This book is covered in two different kinds of prepared animal skin: parchment and tawed skin. It’s the parchment – the greenish area – that first stands out when you see the book.

The parchment has been recycled from a previous life in a church service book of text and musical chant. You can see the musical staves and the handwritten notes and words in ‘gothic’-looking medieval handwriting.

It was entirely usual for bookbinders to save costs and increase their profit margin by reusing discarded manuscripts that might have fallen apart or fallen out of use as part of new bindings. However, this bookbinder didn’t leave the manuscript in its original state: it was overpainted in a bright green shade. Today, much of this paint has faded or rubbed away, but in some areas we can still how striking it must originally have looked. 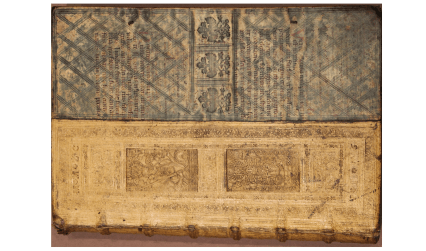 As well as painting the manuscript waste, the binder also decorated it by pressing heated metal tools into the cover of the book, a technique known as blind tooling. This book has lines arranged in a hatched or lozenge design, and the double-headed Habsburg imperial eagle in rows of three.

The other part of the binding is covered in alum-tawed pigskin, a typically German binding material. It’s very common to find this all over a bookbinding, but less common to see it only partially cover the book: here it appears on part of the front and back boards and wrapping across the spine of the book, a style known as a ‘quarter’ binding. The pigskin is very densely decorated in tooling: there are rolled strips of decorative patterns, and two stamped panels depicting different scenes. 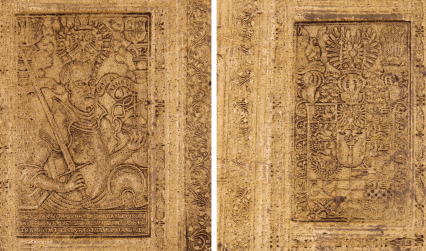 In the upper panel is a picture of Charles V, Holy Roman Emperor (1500–1558) carrying the imperial sword and orb. Portraits of people are not uncommon in the decoration of alum-tawed pigskin bindings, and rulers or notable intellectual figures (especially Martin Luther (1483–1546)) are often found. In the lower panel are the arms of the prince-electors of the state of Brandenburg, which may indicate where the binding was made and decorated.

Towards the top and bottom of the binding, two rectangular panels very typical in German bindings bear the initials ‘M.M.Z.C.’ and the date ‘1576’, but the owner who bore these initials has not yet been identified.

Although this binding is very striking and an unusual example in the RCP library collection, recycled manuscript painted blue or green was commonly used for university or scholars books in the 16th century. It looks extravagant to us today, but was then considered cheap and robust.

Hundreds of 16th and 17th century book bindings are preserved in the RCP library collections, and our rare books are available to researchers by appointment.

We use cookies on this website. By using this site, you agree that we may store and access cookies on your device. Find out more.
Date
1 September 2017
by
Katie Birkwood ,
Rare books and special collections librarian