Skip to main content
‘Like a ghost…’: women in the archives of the Royal College of Physicians

The RCP’s current exhibition, This vexed question, includes several documents from our archives that help tell the history of women in medicine.  Assistant Archivist, Felix Lancashire, delves into the records to see what our archives reveal about the RCP’s attitude to women in medicine and women’s health over the last 500 years.

When Elizabeth Garrett Anderson (1836–1917) was denied the right to apply for a licence from the Royal College of Physicians in 1864, the reason given by the RCP was that its 1518 founding charter only explicitly gave it the power ‘to permit men to practice medicine’ (MS4917). Dr Anderson turned instead to the Society of Apothecaries, whose constitution made no reference to the gender of its candidates, and became the first woman doctor licenced in Britain (the Society promptly changed its rules to prevent any further women applying).

When I first heard this story, I imagined the more conservative fellows of the RCP heaving a sigh of relief that this 350-year-old loophole had been discovered, giving them an excuse to maintain their cosy old boys’ club. I had assumed that, while the RCP certainly had always excluded women, the authors of the charter had used the word ‘men’ more as an unthinking synonym for ‘persons’ than with the specific intent of excluding candidates based on gender.

However, a 1693 translation of the RCP’s early statutes reveals that the College went beyond assuming that doctors were men to actively discriminating against women practitioners. In a section dealing with the misuse of urine as a diagnostic tool, the statutes ‘forbid all persons practising physick [from cooperating with] those idiots and silly women who carry the pis[s]pots of sick persons about’ (p.164). One of the RCP’s roles was to prevent unqualified people practicing medicine, but is there further evidence that they treated unqualified women differently to their male counterparts?

The RCP annals contain the minutes of cases of unlawful practice. They include examples of unlicensed women receiving harsh punishments, while men receive lighter reprimands for seemingly greater infringements. In 1571, Emma Baxter, described as ‘an ignorant and bold woman’, was imprisoned and fined for practicing without a licence, although there is no mention of her harming any of her patients.  Just two years earlier, Bartholus Sylva, also unlicensed, had been accused of killing one patient through incompetence and harming two others. However, the RCP postponed hearing his case, choosing instead to prioritise one of their perennial disputes with the Company of Barber-Surgeons (MS2295 pp.44-48).  (Sylva was eventually imprisoned, but the RCP was certainly slower to act in his case than in Baxter’s.)

The RCP’s crackdown on unlicensed practitioners was often, arguably, more about protecting its own monopoly on medical care than it was about ensuring patients’ welfare. In 1738, Joanna Stephens was recognised by the Board of Longitude for her discovery of a treatment for kidney stones (her pills were made from snails, burnt vegetables, honey, and soap). The only two Board members who refused to sign the statement endorsing Stephens’ discovery were Thomas Pellet (d.1744) and Robert Nesbitt (d.1761), president and censor (senior officer) of the RCP respectively. They did submit their own statements, begrudgingly admitting the pills seemed to work, but disputing Stephens’ explanation of how. There is no evidence Stephens’ gender was the reason for their reluctance and they may simply have been loath to credit a non-physician with such a noteworthy discovery (MS2338/11, pictured). 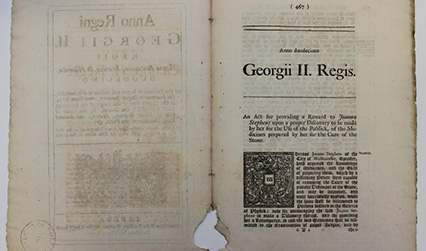 Despite assuming all doctors would be men, there is no mention of gender in the 1518 charter when it comes to the people the RCP was set up to serve.  It simply states that members and fellows should act in ‘the public benefit’. And yet, in 1864, the same year the College seized on the charter as an excuse to deny admittance to Elizabeth Garrett Anderson, it also endorsed a piece of legislation that was highly discriminatory in its treatment of male and female patients. The Contagious Diseases Act introduced regulation for prostitutes, and was an attempt to tackle the rise of syphilis and other sexually transmitted diseases among members of the armed forces. The law gave the police the power to detain any woman they suspected of being a prostitute, and force her to submit to an invasive medical examination or face imprisonment. The act placed all responsibility for the spread of STDs on prostitutes and none on the men who hired them. 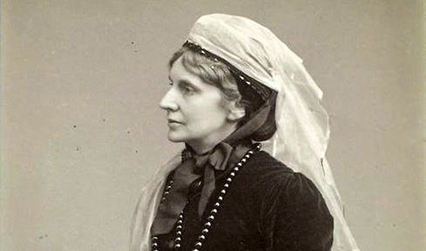 Women’s rights campaigners, such as Josephine Butler (1828–1906) (pictured), won the support of the general public in opposing the act, and it was repealed in 1886. This decision provoked a growing backlash, fuelled by reactionary newspapers, and in 1897, the RCP produced a report in favour of reinstating the Contagious Diseases Act. The report’s sympathies were very much with the male patients: ‘[i]t is difficult to describe the painful impression made by the inspection of these sick soldiers […]. […T]he appearance of the sufferers was most pitiable’.  While the report did call for the education of soldiers in matters of sexual health, it also supported the compulsory medical examination of prostitutes.

The RCP went further in recommending that women should not be employed as ‘coolies’ (labourers) in or near the barracks, as ‘such women are frequently the source of aggravated forms of venereal disease’ (MS5069). No mention is made of healthcare for these women, and this rule would have denied them a means of employment. Despite the RCP’s intervention, the Contagious Diseases Act was not renewed.

The reactionary policies of the RCP were by no means always reflected in its individual members. Benjamin Ward Richardson (1828–1896) had no patience with the idea that people’s roles should be determined by their gender, emphasising in an unpublished note that ‘[t]he bearing of children is the only practical difference between women and men’ (MS520/17). In 1886, he published a pamphlet praising the women fighting for equality in the medical profession:

[i]f one woman can obtain the degree of Doctor of Medicine or the Membership of a College of Surgeons, why should not another woman win as a wrangler [a mathematician], or a physicist, or a classic?  Why, in any competitive mental trial, should not a woman enter the arena? (p.608)

William Ogle (1824–1905) was physician to the Derbyshire Royal Infirmary in 1865, and sought the advice of Florence Nightingale (1820–1910) in redesigning the hospital and establishing a nursing school on the site. Ogle deferred to Nightingale’s judgement in all matters, including the recruitment of staff for the new school. In her letters to him, which are held in the RCP archives, Nightingale repeatedly refuses to give her opinions on religious or political matters, and is often reluctant even to offer medical opinions:

if the question were asked me whether to extend the old Hospital or to build a new one, I should certainly answer – the latter. But the question has not been asked me. And you see, like a ghost, I can only speak when I am spoken to (MS2415/6, pictured) 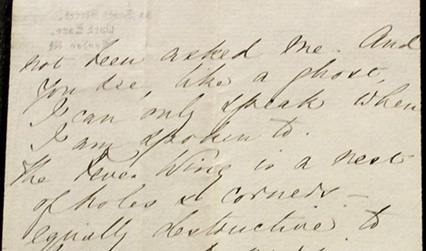 As a public figure, Nightingale was wary of expressing views that would create publicity damaging to ‘the cause’ of nursing, but it is possible she would not have had cause to fear such hostility if she had been a man voicing opinions outside of his specific area of professional expertise.

RCP president Thomas Barlow (1845–1945) certainly had no qualms about expressing his views on issues of women’s health, writing to The Times on 15 June 1913 to express his support for the force-feeding of suffragette prisoners, and, in February 1917, his opposition to helping mothers with any alternatives to breastfeeding (see also MS4084). Like many of his generation, he was also firmly opposed to abortion (see MS823). Given the fact that he seems to have felt women should have little or no control over their own bodies, it is perhaps surprising to find evidence that Barlow supported the right of women to practise medicine. In a letter to his sister in 1907, Barlow wrote: ‘[i]nteresting phase now at Coll of Phys. I think we shall be able to admit the women now for the [conjoint diploma with the Royal College of Surgeons]’. Frustratingly, the second page of the letter is missing and his following sentence, ‘[i]t is certain […]’ is left hanging (ALS/B67). Even more compelling is the fact that his signature appears on an 1895 petition, organised by Elizabeth Garrett Anderson, demanding women be permitted to sit RCP exams (uncatalogued MS).

That petition was unsuccessful, but a further campaign launched in 1907 (to which Barlow alludes above) finally compelled the RCP to admit women as members in 1909. It was not, however, a foregone conclusion that the College would change its stance at this time. Beatrice Webb (1863–1951) was training to be a doctor at Birmingham University from 1903–1907, and her letters to friends reveal the prejudice she faced from her male teachers and colleagues. In a letter written on 14 December 1903, Webb describes how lecturer and RCP member, William Foxwell (1853–1909), praised her essay as the best in the class, but upon realising she was the author immediately began to pour scorn on it instead (MS79, pp.113-115). She later attended a debate about the higher education of women, at which a male student

had a good deal to say about the kitchen dresser being the woman’s proper place and a good deal more about the 5 oz deficiency of brains. I felt that as a whole the hundred young barbarians there did not approve of the education of women (MS79, pp.186-187).

Despite admitting women as members in 1909, and fellows in 1925, the RCP was slow to drop the assumption it had held since 1518 that physicians were likely to be men. At least as late as the 1970s, ‘Name of wife’ was still a question on the biographical form completed by newly elected fellows, and Ladies Committees were still a feature of RCP conferences, the role of which was to organise entertainments for the wives and children of male delegates; typical activities included visits to the zoo and ‘fashion parades’ (see for example MS5736).

In 1989, Margaret Turner-Warwick (1924–2017) became the first woman to be elected president of the Royal College of Physicians, but she specifically chose not to speak out on issues of gender. Arguably echoing Florence Nightingale’s policy of commenting only on medical matters, Turner-Warwick stated ‘I had no wish to be any kind of feminist pioneer or curiosity. That would have got in the way’. But, Jane Dacre (b.1955), who completed her term as president in 2018, was far more forthright on the subject of gender, spearheading initiatives such as the Emerging Women Leaders programme, and commissioning exhibitions and events celebrating the achievements of women in medicine.

The RCP’s archives reveal that throughout its history it has very occasionally taken steps to advance the rights of women in medicine (opening up its exams in 1909, when there was still much opposition among the profession), but has more often lagged behind public opinion (particularly so in 1897 when it argued for the reintroduction of the Contagious Diseases Act). However, there are still many stories waiting to be discovered; all the documents referred to above, as well as thousands more, are available to anyone to view in the RCP’s reading room. The archive catalogue can be searched at rcp-asp.adlibhosting.com.