The eye, because of its importance as a sensory organ and the mystery of sight, has always been a source of great curiosity.

Ophthalmology – the study of diseases and disorders of the eye – developed as scholars, physicians and surgeons began to specialise. The complex anatomy of the eye took a long time to be revealed, and research has often taken unusual routes.

A manuscript in the RCP archives details recipes for treating a cancer of the cornea. These include the use of barley water, rhubarb, juice of nightshade, and liquorice, with some concoctions ‘to be taken inwardly’, and some ‘to be used outwardly’. The recipes come from the Compendious treatise of all diseases incident to the eyes written by the 17th century doctor Luke Schacht. The manuscript was compiled by an English student at the University of Leyden, and he noted that Schacht was a  ‘Celebrated professor of Physic, and preceptor to the renowned Dr Boerhave (1668–1738)’, although we know little about Schacht today. 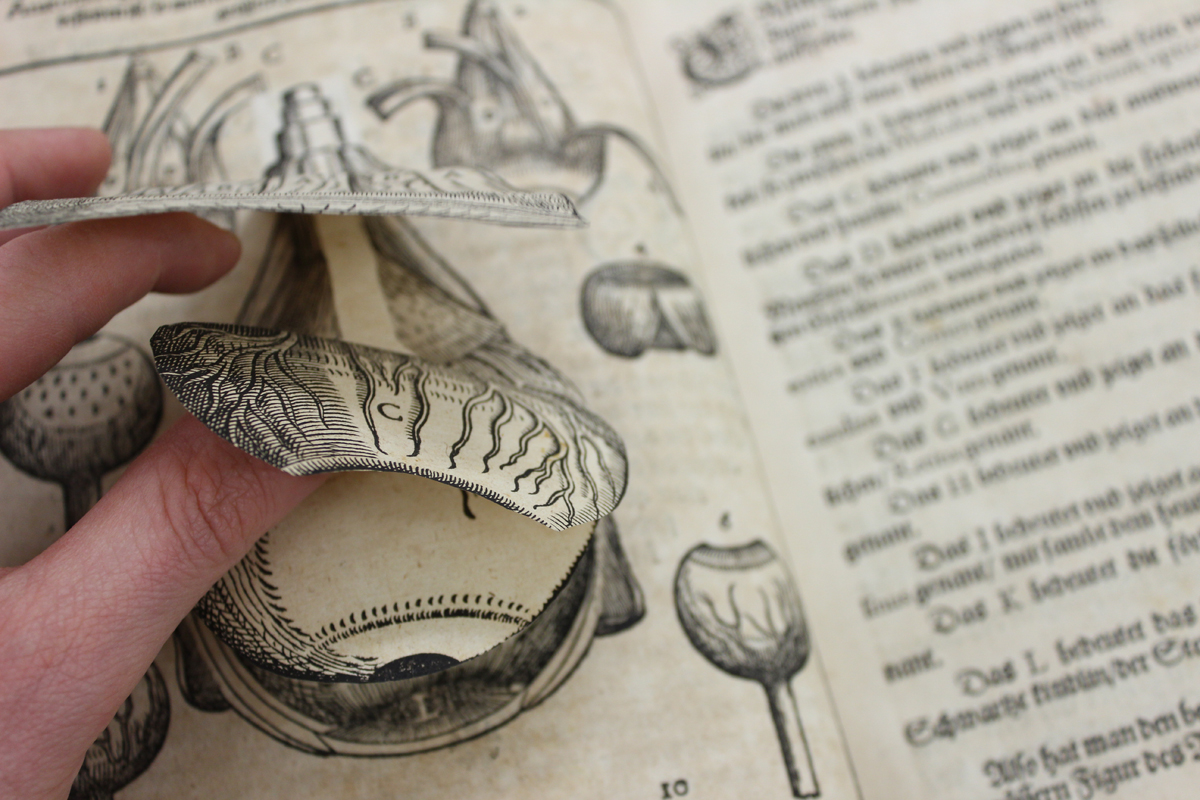 The RCP library collection also includes some fascinating early texts on diseases of the eye. Ophthalmodouleia, published 1583, was the first German book on ophthalmology – most scholarly books of the time were published in Latin. It covers a wide range of eye diseases and defects, methods for curing them, and surgical instruments and techniques, and many illustrations, including some with pop-up layers. Although a scientifically-minded man, its author Georg Bartisch (1535–1607) held strong occultist beliefs, and a section of Ophthalmodouleia discusses eye diseases caused by magic, witches and the devil.

Another fascinating work at the RCP is The Frenche chirurgerye by Jacques Guillemeau (1550–1612). Published in 1597, this is a broad look at surgery and its instruments. A section on eye surgery includes instruments such as needles for removing cataracts, an eyelid dilator, and an artificial gold eye.

Our current exhibition Chemistry in the garden features a print of a more recent figure in ophthalmology, John Cunningham Saunders (1773–1810). Saunders took up ophthalmology as a career due to the demand for specialists during an epidemic of Egyptian ophthalmia (an inflammation of the eyes) in the Napoleonic Wars. He was the first surgeon ever to specialise exclusively in the eye, and co-founded the first hospital for Curing Diseases of the Eye and Ear. The hospital relocated and is today still leading its field as Moorfields Eye Hospital.

Medical ophthalmology is the RCP specialty of the month for April.

Find out more about the RCP's library, archive, and museum on our blog, and follow @RCPmuseum on Twitter.