We’re currently putting the finishing touches onto our new exhibition, ‘Scholar, courtier, magician: the lost library of John Dee’, which will open to the public on Monday 18 January 2016.

John Dee (1527–1609) was one of the most intriguing and enigmatic characters of Tudor England. An outstanding polymath, he was interested in all branches of learning. He served Queen Elizabeth I at court, advised navigators on trade routes to the New World, travelled throughout Europe and studied ancient history, astronomy, cryptography and mathematics.

But Dee has always been best known for his private study of angels and alchemy. Possibly an inspiration for Shakespeare's sorcerer Prospero, Dee famously attempted to contact spirits and discover the philosopher’s stone. His alchemical pursuits and ‘angelic conversations’ continue to fascinate over 400 years after his death.

The RCP library holds more than 100 volumes stolen from Dee during his lifetime: the largest single collection of his books in the world. ‘Scholar, courtier, magician’ sees these displayed for the first time. The exhibition explores Dee's life and legacy through these books, as tantalising glimpses of his thoughts emerge from their heavily annotated margins.

Dee claimed to have owned over 3,000 books and 1,000 manuscripts, which he kept at his home in Mortlake, Surrey. While he went travelling in the 1580s, he left his library and laboratories in the care of his brother-in-law, who allowed others to steal its contents. Dee was devastated by the ransacking of his library. He managed to recover some items, but many remained lost. Some of these volumes later passed into the library of Henry Pierrepont, Marquess of Dorchester (1607–1680). Dorchester’s family presented his entire library to the Royal College of Physicians after his death. 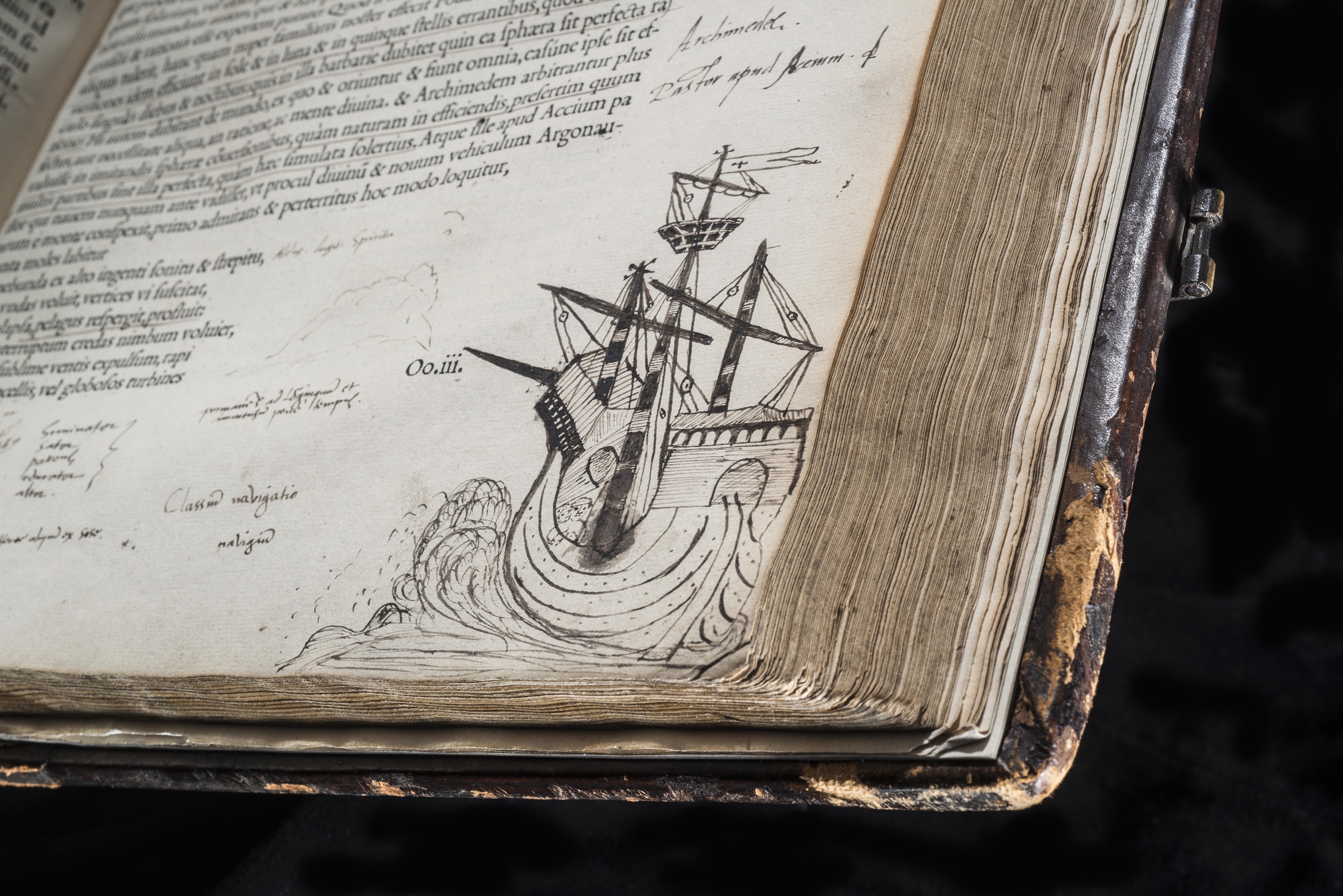 John Dee’s sketch of the ship in the margins of Cicero¸ Opera (Paris, 1539–40). © Royal College of Physicians / John Chase

In the exhibition you can explore Dee’s notes, annotations and doodles close-up in this extraordinary collection of early printed books. Over 40 of Dee’s books are displayed alongside some of the magical objects that he is said to have used to communicate with angels, loaned from the British Museum and the Science Museum, London.

Dee has inspired numerous works of literature, art and music. He may have been the inspiration not only for Shakespeare’s character Prospero in The tempest, but also the title character of Ben Jonson’s The alchemist. He appears in several paintings, including Henry Gillard Glindoni’s imposing depiction of Dee conjuring before Elizabeth I and a Quentin Blake mural at Addenbrooke’s Hospital, Cambridge. Dee was even the title character of Damon Albarn’s 2011 rock opera. To accompany ‘Scholar, courtier, magician’ we have commissioned a new film from the artist Jeremy Millar, which will explore Dee’s remarkable life and legacy.

Dee has been variously praised and ridiculed by a range of writers.

He was a ready, witted Man, quick of Apprehension, very Learned, and of great Judgment in the Latine and Greek Tongues. He was a very great Investigator of the more Secret Hermetical Learning, a perfect Astronomer, a curious Astrologer, a serious Geometrician; to speak truth, he was excellent in all Kinds of Learning.