The 1871 trial of Thomas Ernest Boulton (1848–1904) and Frederick William Park (c1848–81) was a celebrated scandal in Victorian England, featuring testimony from distinguished RCP fellow Alfred Swaine Taylor. An account of the trial published in the popular press is part of the RCP library’s collection of medico-legal tracts.

Boulton and Park – also known as Stella Clinton and Fanny Winnifred Park – were members of a group of young men in London who enjoyed dressing in women’s clothing at home and out in town, performing in drag in theatrical entertainments, and who also had romantic and sexual relationships with other men.

They were arrested by the police on 28 April 1870 as they left the Strand Theatre, charged that they:

A key part of the evidence brought at the hearing was the testimony of several physicians and surgeons on the question of the sexual acts that may have been committed. Medical examinations took place at Bow St police station and at Newgate gaol, in extremely unpleasant conditions. Police surgeon James Paul asserted that his examination revealed that there had been ‘frequent unnatural connexions’. However, other experts were called by the defence to state the opposite case. Frederick Le Gros Clark FRCS, Henry James Johnson FRCS and Alfred Swaine Taylor FRCP all testified to that they had seen no evidence to suggest that ‘unnatural intercourse had taken place’. 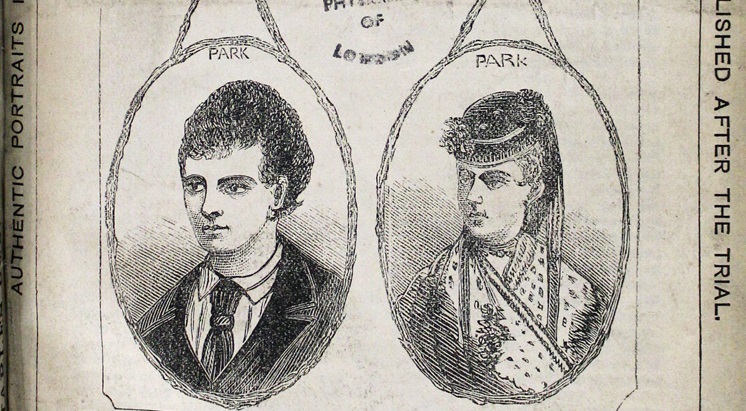 Life and examination of the would-be ladies, published London, 1870

The Lancet was concerned that the conflicting medical opinions would reflect poorly on the medical profession, and advised that experts from abroad be requested to assist: ‘It is from no want of respect to our English confrères that we maintain that none of them is likely to have a really decisive opinion on the points involved. On the other hand, there are physicians in Paris, in Spain, and in Constantinople, who must, unfortunately, have seen very much of the results of a certain hideous vice’.

The trial before the Court of Queen’s Bench took place in May 1871 at Westminster Hall amid a frenzy of public interest. The charge of sodomy was dropped after the medical examinations provided little conclusive evidence. This left Boulton, Park, and six of their associates (some of whom had fled abroad and were tried in their absence) charged with ‘conspiring and inciting persons to commit an unnatural offence’, ie that they had been dressing as women in order to solicit men for sex. The act of men dressing as women was, in itself, demonstrated not to be a crime, and the evidence brought by the prosecution failed to demonstrate that any conspiracy had taken place.  The jury took only 53 minutes to return a verdict of not guilty on all counts, and all the accused were freed.

Life and examination of the would-be ladies is a twopenny news pamphlet printed shortly after the end of the initial hearing at Bow Street magistrate’s court in May 1870. It plays directly to public desire for scandal, gossip and salacious detail, providing elaborate descriptions the dress and appearance of the defendants it describes as ‘England’s gems in petticoats’.

The publication was added to the RCP library as part of a series of over 500 19th-century pamphlets of medico-legal interest.  These were first collected by Alfred Swaine Taylor (1806–80) – one of the physicians asked to examine Boulton and Park – and were later added to by Joseph Payne (1840–1910). Taylor was the pre-eminent expert in the field of medical jurisprudence, known today as forensic and legal medicine.  The collection reflects his interest in all medical aspects of legal proceedings, including a great number on poisons and poisonings, as well as pregnancy and abortion, public health, water quality and mental health.

The medico-legal tracts are catalogued online, and may be consulted in the library reading room. Please contact the library for more information.