Towards the end of the Second World War, on 15 April 1945, the 11th British Armoured Division entered the concentration camp of Bergen-Belsen in northern Germany. The Army began the huge task of clearing the dead and organising the camp, but the military doctors struggled to find an appropriate food regime to help the estimated 60,000 starving and sick inmates. A Medical Research Council team, led by Janet Vaughan (1899–1993), was sent to assess the value of using hydrolysates, or concentrated protein preparations, an experiment she described as ‘practising science in hell’.

On the day after the liberation of the camp, a convoy of water tankers and three-ton lorries arrived, carrying cooking equipment and supplies. The first food given to the inmates was ‘compo’ rations, designed for active soldiers, a stodgy diet of tins of meat, vegetables, fruit, puddings, butter, cheese and jam. Apart from the acute distribution problems, which meant many of the bedbound inmates were overlooked, it soon became obvious that the rations were wholly unsuitable. Horrifically, some of meat was pork, culturally inappropriate (and offensive) for the largely Jewish camp population. For most of the prisoners the diet proved to be far too rich, too much for their shrunken, weak intestines: many of the inmates couldn’t keep the food down, there was a renewed outbreak of vomiting and diarrhoea and it was later estimated 2,000 people died as a result of being given this initial, wrong diet.

Food distribution problems eased with the arrival in early May of almost 100 medical students from London, who were tasked with triaging the inmates, clearing the huts and making sure food reached the most-needy, but the problem of what diet to give to the starving remained.

One approach was to try the Bengal Famine Mixture, which had been used during the Bengal crisis of 1943. Anthony Aspinall, leader of the British Red Cross team at Belsen remembered:

The gruel was a mixture of powdered milk dissolved in boiling water, laced with enormous quantities of white sugar and flour… In appearance, the mixture resembled a thick, white soup, its taste, excessively sweet. It was universally rejected…. The occupants of the huts complained bitterly that the smell made them feel more unwell than the stench of death and excrement in which they had for so long existed.

In March 1945, the Dutch government had appealed for help for the starving population in the north of the Netherlands. The Medical Research Council persuaded British drug manufacturers to produce ‘protein hydrolysates’, amino acids which could be absorbed by the body more rapidly than intact proteins, and sent Janet Vaughan, Rosalind Pitt-Rivers (1907–1900) and Charles Dent (1911–1976) to Brussels to test hydrolysates on returning prisoners of war, but once the full horror of Belsen had been revealed, they were redirected to the northern German camp. 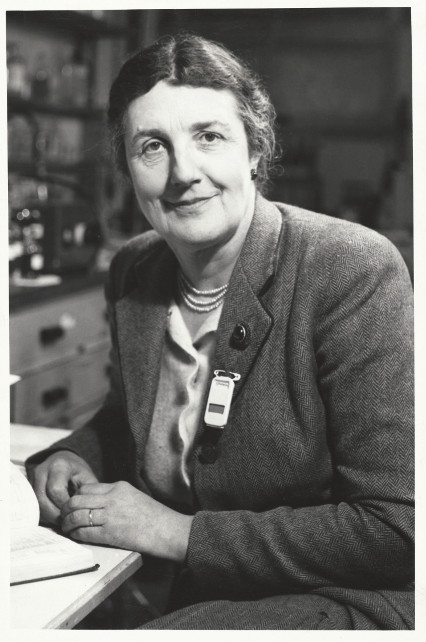 Janet Vaughan, the well-connected daughter of the headmaster of Rugby, great great niece of Sir Henry Halford (1766–1844), president of the Royal College of Physicians, and second cousin of Virginia Woolf, was an expert on blood disorders, specifically pernicious anaemia. Nutrition was not her particular area of expertise, although her work on the anaemias had made her acutely aware of the link between malnutrition and disease and, like many doctors of her era, she had been radicalised by the experience of witnessing acute social deprivation, in her case among the poor in London hospitals.

Vaughan arrived at Belsen with the intention of carrying out a rigorous, scientific trial of the hydrolysates. The protein hydrolysates were to be administered orally or by injection/nasal tube. Extensive investigations were planned, including assessing total plasma estimations before and during treatment, haemoglobin, urine and blood-volume estimations.

But the conditions Vaughan found in Germany made testing and experimentation almost impossible: the hospital facilities were primitive, the patients and staff spoke different languages, the oral mixture smelt and tasted awful and, crucially, it was almost impossible to use injections or nasal tubes on the traumatised inmates. Vaughan explained:

If a syringe was used to collect samples or an attempt made to set up an intravenous drip they…shrieked “nicht crematorium” and curled up shaking in the bed. It had been the habit in the camp for the doctors to inject people with benzene or petrol when alive to induce a temporary paralysis so that they could be taken to the crematorium as dead.

Vaughan quickly realised the failure of the trial. She later admitted in a letter to her friend and mentor, the American anaemia specialist George Minot, ‘Things can be planned in London, but the reality is something very, very different. Practising science in hell itself is a queer experience.’ On Wednesday 16 May at Belsen she addressed the medical students. One, Alex Paton, recalled: ‘Janet Vaughan gave talk this evening about her work with protein hydrolysate which confirmed what we thought – that it does not work. She emphasised the value of milk, and other nutrition experts pointed out the danger of giving too much food too early.’

But despite Vaughan’s realisation and speedy backtracking, the message was slow to get through, and hydrolysates were used sporadically at Belsen after 16 May. It was realised by the medical staff ‘on the ground’ that feeding small amounts of food by mouth seemed to be the most effective treatment.

Vaughan returned to the UK, to her family, to a post as principal of Somerville College, Oxford and her scientific work. On 29 May 1945, with Dent and Pitt-Rivers, she presented the findings of the hydrolysates experiment to the Royal Society of Medicine: in response, the Medical Research Council ordered the production of hydrolysates to stop. She had spoken up about the failure of the trial, ensuring other approaches to treating starvation had to be investigated. Personally, she was deeply affected by her time at Belsen – her daughter recalled she screamed at her children for a month after her return – but, conforming to the culture of mid-20th century Britain, she rarely talked about her experiences.

Escaping the holocaust: the stories of three RCP fellows

Many of those interviewed for the RCP oral history project have a Jewish heritage. The families of some came to the UK in the Jewish diaspora of the late 19th and early 20th centuries. Others arrived throughout the 1930s, moving first to countries neighbouring Germany and then to the UK as Hitler’s expansionist policies became apparent. This post looks at three of their stories.

27 January is Holocaust Memorial Day. Documents in the RCP archives reveal survivors’ testimonies and how RCP physicians were involved investigating the horrific medical experimentation that had been perpetrated in German concentration camps and other sites.