Skip to main content
‘Bought this Book … for my Wife’: secret diseases of women

In October 2019, Catherine James joined the library, archive and museum team as an embedded research student. She’s working on a doctoral research project at the Institute of English Studies, University of London, based on the rare book and manuscript collections of the RCP. As part of the project, ‘Women’s Ownership of Medical Knowledge in Tudor and Stuart England, 1485-1714’, Catherine is surveying all the pre-1714 books in the library, looking for evidence of women producing, owning and using them. Along the way she’s finding all sorts of beautiful, intriguing and downright surprising books, images and inscriptions.

For Valentine's Day, we bring you the first in an occasional series of blog posts by Catherine. Over the coming months, she’ll give us some glimpses of the things she’s finding in the library, starting today with a less than romantic marital gift. 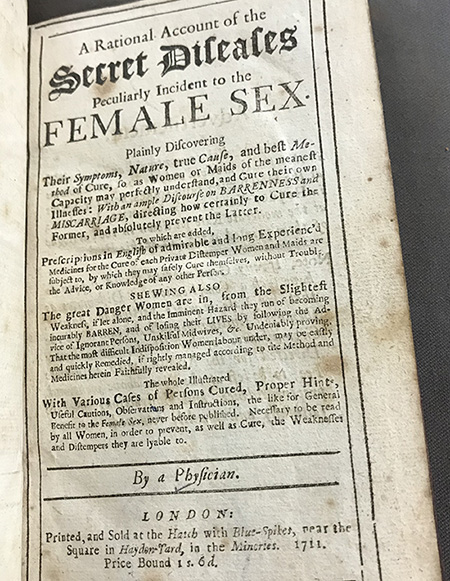 A rational account of the secret diseases peculiarly incident to the female sex, published London, 1711.

The book A rational account of the secret diseases peculiarly incident to the female sex is a women’s health manual published by an anonymous physician in 1711 ‘So as Women or Maids of the meanest Capacity may perfectly understand, and Cure their own Illnesses.’

This book appears to be very rare today. Initial searches haven’t found any other copies catalogued in UK libraries, but the book is listed in the 1733 catalogue of the library of Charles Viscount Bruce of Ampthill. The RCP copy was bequeathed in 1941 by obstetrician Herbert Ritchie Spencer (1860–1941), along with many other books from his library.

Similar anonymous guides to women’s health were published throughout the eighteenth century, and copies of these later texts are more readily available (for example The ladies physical directory, or a treatise of all the weaknesses, indispositions and diseases peculiar to the female sex, eight editions of which were published in the first half of the eighteenth century, and many more copies of which are known to survive.

A rational account of the secret diseases concerns itself with menstrual problems (absent periods, heavy periods, period pain), fertility, pregnancy and pregnancy loss, and prolapse. It also includes a disease referred to as ‘the whites’; the purulent vaginal discharge associated with this condition suggests that it was a sexually transmitted infection. Perhaps surprisingly for a text about diseases peculiarly incident to women, there is also a chapter dedicated to haemorrhoids! 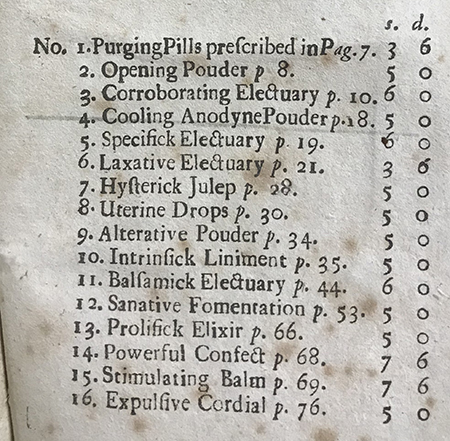 At the end of the book there is a short catalogue listing the medicines referenced in the text – and the price at which they might be purchased from ‘the Gentlewoman at the Hatch with Blue Spikes’ in the Minories, a district in the City of London near to the Tower of London. (The same Gentlewoman also sold bound copies of the book, for one shilling and sixpence – approximately £8 today.) Medicines in the catalogue range from Purging Pills, available for three shillings and sixpence, to Stimulating Balm, which cost seven shillings and sixpence.

There are no book plates or owners’ names evident in the book, so it is not clear to whom it belonged or how it came to belong to the RCP. However there is an unusual inscription on the front end paper: ‘Bought this Book at London for my Wife, April 1713.’ I can only imagine how she might have responded to such a romantic gift!

The RCP library collections are catalogued online, and available for research by appointment.

We use cookies on this website. By using this site, you agree that we may store and access cookies on your device. Find out more.
Date
14 February 2020
by
Katie Birkwood ,
Rare books and special collections librarian

Drawing on the rich resources of the RCP library and archives a new doctoral research project at the RCP will investigate how women used and shared medical knowledge in the 16th, 17th and 18th centuries.

'From her truly affectionate friend'

This lengthy inscription is found in a copy of surgeon Richard Wiseman’s Severall chirurgical treatises (1676) in the RCP library. It shows that this grisly book was owned by Jane Hatcher, née Hussey (1657–1735), granddaughter-in-law of Thomas Hatcher (c.1589–1677) of Lincolnshire.

‘Like a ghost…’: women in the archives of the Royal College of Physicians

The RCP’s current exhibition, This vexed question, includes several documents from our archives that help tell the history of women in medicine.  Assistant Archivist, Felix Lancashire, delves into the records to see what our archives reveal about the RCP’s attitude to women in medicine and women’s health over the last 500 years.