Skip to main content
The birth of a building

When you stand before a building – especially one as apparently solid and fixed in place as our very own RCP building – it's difficult to imagine that its appearance is the result of a long and complicated process. The design process involves numerous alterations: this building could easily have ended up looking very different. When Denys Lasdun began working on his designs for the RCP in the late 1950s, he knew exactly how he wanted some aspects of the building to appear, but absolutely no idea about some of the others. 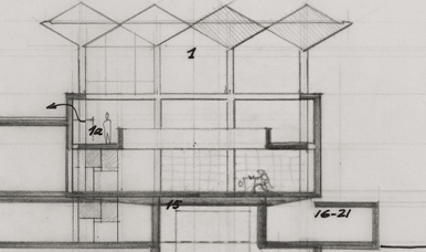 An early design for the RCP building by Denys Lasdun

He knew straight away that he wanted the RCP building to be arranged around a central courtyard, to create a protected, peaceful environment, where physicians could think and converse. Controversially he turned the building away from Regent’s Park. He didn’t want physicians to be distracted during meetings, so there are no grand windows in the Dorchester Library at the front of the building overlooking the park.

Lasdun thought that he wanted some elaborate sculpting on the outside of the building. An architectural plan that is on display in the RCP’s 2014 exhibition, The anatomy of a building: Denys Lasdun and the Royal College of Physicians, shows that Lasdun’s original idea for the exterior of the Dorchester Library involved a series of diamond-shaped structures on the roof. Lasdun later rejected these as being ‘too flamboyant’. 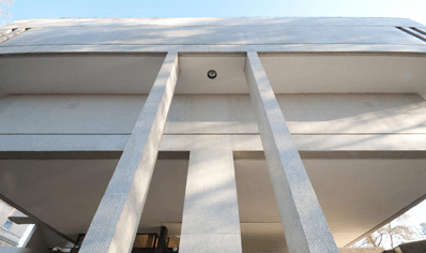 The front of the RCP building: three pillars at the entrance and small windows facing towards the park

Perhaps the most striking architectural feature of the RCP building is the three pillars at the front entrance. These were a last-minute addition, and Lasdun deliberated for a long time over their appearance. Lasdun wanted the Dorchester Library to extend outwards and float unsupported above the building’s entrance, but this could only be achieved by using enormous 50 ft cantilevers (reinforced concrete beams) that extend from the library back into the building, and an additional support beneath. Lasdun’s indecision about how these front supports should look was apparently well-known, as some friends sent him a rather crude Christmas card suggesting he could use baubles at the entrance instead.

The RCP’s building committee had some interesting reactions to Lasdun’s early designs for the building. Dr Hunter thought it ‘splendid and impressive’, Leonard Wolfson’s assessment was that it ‘looked like a battleship’, and while Dr Newman liked the building, he unfortunately ‘dislikes modern architecture’. Thankfully, president Robert Platt said, ‘It grows on me. I am sure it is a masterpiece.’ He could not possibly have known just how exciting a masterpiece he would get!