Skip to main content
Around the world in 80 resorts: travelling for health in the 19th century

A surprisingly large number of books and pamphlets about health resorts have been spotted in the RCP library collection during the library’s participation over the last year in the UK Medical Heritage Library (UK-MHL) project. Two hundred titles have come to light which provide information on health resorts as treatment, and attempted cure, for a range of 19th-century diseases.

It’s well known that patients with tuberculosis were often advised to move to a different climate to aid recovery. The popularity of travelling for health only increased when members of the royal family, including King Edward VII, were seen 'taking the waters' at spa towns on the European continent, such as Mariánské Lázně (formerly known as Marienbad) in the Czech Republic.

There was plenty of help for the British traveller in search of a cure or relief of symptoms: a 19th-century version of ‘health tourism’. Mineral waters, often sulphurous, were recommended for asthma and gout. The treatment of gout, rheumatic arthritis, skin diseases, injuries, digestive and respiratory catarrh, syphilis and related conditions, nervous system diseases, metal poisoning, and eye diseases are all discussed in Aix-la-Chapelle as a health resort, Louis Alexander’s 1892 book about the town also known as Aachen on the Franco-German border.

Ornate and grand hotels were built in health resorts to house distinguished visitors and their attendants. These are exemplified by L’Hotel Kursaal at the top of the Maloja Pass in Switzerland, pictured in AT Tucker Wise’s 1888 book Alpine winter in its medical aspects. 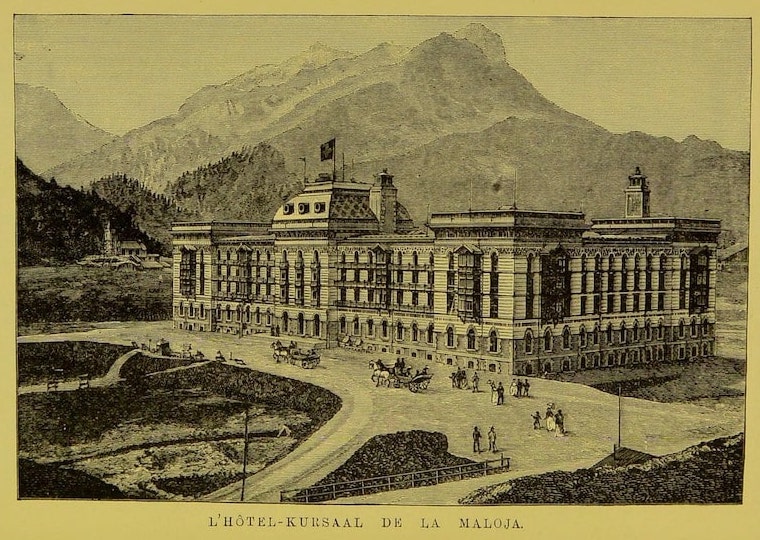 Alpine winter in its medical aspects: with notes on Davos Platz, Wiesen, St. Moritz, and the Maloja. AT Tucker Wise, published London, 1888.

A 19th-century equivalent of the Lonely Planet series gave guidance on practical matters. Health-resorts at home and abroad, by Matthew Charteris, provides detailed practical information for the traveller and physician. This includes a primer to the metric system of measurement, including units of length, weight and capacity. Writing in 1885, the author provides detailed instructions for converting measurements and is keen that:

The leading facts concerning the metric system should be understood, so that prescriptions for patients going to health resorts on the Continent may be written in the metric instead of the old method.

In The health resorts of the Canary Islands in their climatological and medical aspects, by John Taylor (1893), the preface of the book asks visitors to take note of the welfare of the animals used for transporting them around the islands:

The horses, mules, and asses, brought for the use of tourists in the islands, are often in a most wretched condition from sores, under-feeding, and over-driving. British travellers are therefore earnestly requested, as the only valid means of abating this persistent cruelty, to examine all animals before engaging them. It is especially neces-sary to cause the saddles to be removed.

Map of Tenerife in The health resorts of the Canary Islands in their climatological and medical aspects. John Taylor, published London, 1893.

Many books on health resorts included a guide to the journeys and to the local area as well as health information. Edward Sparks’ The Riviera (1879) notes that:

During the last seven or eight years Bordighera [on the Italian Riviera] has been gradually gaining in favour as a winter residence for invalids … [it is] of the same character, and apparently of much the same age, as most of the other coast towns. It consists of houses closely packed together … It has the usual narrow streets, rather smelly, and not over clean, here and there arched over, or else buttressed across, so as to weld all the houses more or less into one mass. A church, and a square with a battered marble fountain, comprise its chief objects of interest.

There are numerous references to health resorts in 19th-century literature. The English town of Bath is a significant location in Pride and prejudice, first published in 1813. Jane Austen depicted her characters visiting this famous spa town and the accompanying social life of evening dances at the Assembly Rooms after people had taken the waters during the day. Susan Coolidge’s Clover (1888), a story of convalescence and romance, is a sequel to the famous ‘Katy’ books (starting with What Katy did in 1872). In the novel, Katy’s sister Clover accompanies her younger brother, who has been very ill, presumably with tuberculosis, to Colorado in the Rocky Mountains.

It’s not only Europe represented in the publications about health resorts. Locations in America, Africa and Australasia all get a mention too. It's very nearly possible to find a whole alphabet of historical health locations:

The UK-MHL project, led by the Wellcome Library, is digitising the works held by nine medical libraries – including the RCP – which were published in the so-called ‘long’ 19th century (1780–1914). In April 2016 there were 198 titles with the subject heading ‘health resorts’ in the RCP library catalogue. Dates of publication range from 1676 to 2012 although there are only 15 titles published since 1914. With approximately 170 titles published within the UK-MHL time span, the peak of the health resort movement was in the nineteenth century. Of these, 57 have been digitised and can be read for free online.