For the first time, digital copies of thousands of items from our historical collections are available online. The RCP has joined several other internationally recognised scientific institutions in partnering with Wiley Ltd to develop an online resource on the history of science.

Wiley Digital Archives is a continuous program of new databases comprised of unique or rare historical primary sources, digitized from leading societies, libraries, and archives around the world, and made accessible in ways that tie directly to research outcomes and educational goals.

Currently, the other partners in the project are:

The Royal College of Physicians of London was founded so that physicians could be formally licensed to practise and those who were not qualified could be exposed and punished. There are many archive records and print publications defining the RCP’s changing role in setting standards in medical practice. From the founding charter to 20th-century reports on the effects of smoking, there is a wealth of material available on the RCP's role in relation to contemporary medical advances.

Our members have always collected books, manuscripts and papers on a wide range of medical and non-medical topics. As a result, the collections contain an eclectic range of 14th- to 19th-century works. These provide glimpses into the lives and social concerns of many distinguished physicians.

Approximately 15,000 items from our collections are now available online Wiley Digital Archives. Everything from the mundane to the beautiful is included. We have the records of the RCP’s first official committee, Comitia, starting in the 1550s, also velvet and silver bound 17th century copies of the statutes. There is also a gorgeously illustrated 19th century Japanese medical scroll. 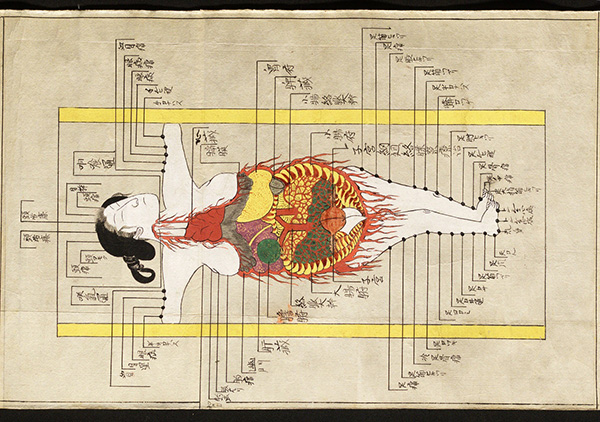 Internal organs and acupuncture points on the arms, in Shishi bessho zui (Illustrations showing how to perceive those who are to die and identify those who are to live). Hozumi Koremasa, Japan, 1820s. MS654.

Included is a mass of clinical research and teaching material. There are patient case notes and printed works from leading physicians such as Matthew Baillie. The records continue into the early 20th century with books and records on medical developments, ethical issues and legal constraints. For example, the many ethical and legal issues relating to abortion in the early 20th century.

The online resource is accessed via a subscription service and is currently available at a range of universities across the USA and UK. It is also freely accessible in the RCP headquarters at 11 St Andrews Place, Regents Park, London, at https://app.wileydigitalarchives.com/rcp.

Further digitised print works from our collections, 4,200 items, are also freely available via the Internet Archive. These were digitised in 2015 and 2016 for the UK Medical Heritage Library project.

Find out the wealth and variety of resources in the RCP collections, available for research by appointment.

Coughs and colds affected communities in the 19th and early 20th centuries in some similar ways as they do today. Infecting people across society, they made up the bulk of general practice complaints.  Despite this, when it came to the study of disease, colds were often ignored. Robert Prosser White, who was very critical of this oversight, attempted to remedy this with his book Catarrhal fevers, commonly called colds, their causes, consequences, control and cure.

If you open a book about 19th century dietary remedies it would be hard to find one that does not mention beef tea. It was a type of broth – made with beef and water – given to patients to drink if they were suffering from digestive problems, fever or weakness. People believed that the tea was nutritious and easy on the stomach, which would help patients to return to their former fortitude.

The Royal College of Physicians (RCP) holds a number of special medical lectures each year. This has been made possible thanks to bequests left to the RCP by fellows and their families. Often named in the donor’s honour, these lectures facilitate discussion and debate around cutting edge medical topics. Now many of the lectures, including the Goulstonian and Croonian lectures, delivered by physicians in the 19th century are available online through the UK Medical Heritage Library (UK-MHL).

Many new and developing technologies in the world today have provided libraries and museums with opportunities to provide access to their collections in exciting and innovative ways. The RCP is embracing these opportunities, and last year became a partner in the UK Medical Heritage Library (UK-MHL) project.