Skip to main content
Albert Schweitzer: a marriage of theology and medicine?

The first floor gallery of the Royal College of Physicians building is home to a diverse collection of portraits. Most of the portraits show fellows of the RCP, but one – a portrait of Albert Schweitzer (1875–1965) –tells a captivating story of the marriage of theology and medicine through the life of the man himself.

Schweitzer contributed significantly to the field of medicine and theology during his life-time, the rewards of which continue to be reaped today. Schweitzer was born into an Alsatian family with an intensely theological background- his father and maternal grandfather were both minsters. He began his theological studies in 1893 and obtained a doctorate in Philosophy from the University of Strasbourg in 1899, but was also an esteemed organist and musician.

However, his later life is dominated by his study of medicine. Schweitzer began to study medicine at the University of Strasbourg in 1905. After Schweitzer had obtained his MD degree, he founded the Albert Schweitzer Hospital in French Equatorial Africa in 1913. After a brief period of imprisonment as a prisoner of war in a French internment camp between the years 1917–1918, Schweitzer resided in Europe for six more years before he returned once again to his Hospital in Lambaréné where he lived out the rest of his days. During his time in Lambaréné, he was doctor and surgeon in the hospital, pastor, superintendent of buildings and grounds, playing a very active role in the local community. 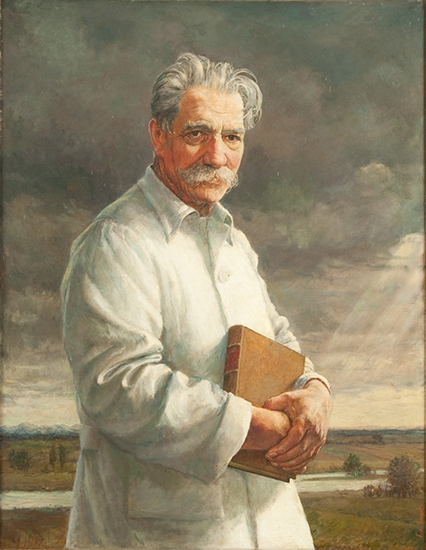 What is Schweitzer best remembered for today?

His achievements include the establishment of the Albert Schweitzer Hospital in 1913 in French Equatorial Africa, now Gabon, which he continued to run until his death in 1965. The hospital celebrated its 100 birthday in 2013. Schweitzer received the Nobel Peace Prize in 1952 and also wrote extensively on the subject of theology. Do feel free to explore the recommended reading list, which can be found at the end of this post.

You may be confused as to why an acclaimed scholar in rheology has earned his place in collection of portraits housed within the Royal College of Physicians. In truth, Schweitzer’s impact was so robust that it affected medicine too. The two diverse disciplines may be said to come together in the establishment of his hospital.

The Albert Schweitzer hospital, which was established in 1913 may be said to be the physical manifestation of his ethical theory outlined in the concept of ‘the world-view of Reverence of Life’ which simply facilitates what he saw as the natural and innate desire of all things to live. In Schweitzer’s own words in his book Life and thought he described the will-to-live as a person’s ‘thirst to be permitted to preserve [their] humanity, and to be able to bring to other existences release from their sufferings’.This philosophy seems to be highly compatible with several aspects of medical practice which advocate the preservation of life, such as this extract from the Hippocratic Oath: ‘I will give no deadly medicine to any one if asked’. The existence of this medical establishment, founded on his Christian ethical principles, continues to be the major source of medical care for the neighbouring area, prolonging and enhancing lives, just as his philosophy encourages.

Theology is not so far away from medicine as the modern mind would have us think, especially not in Schweitzer’s case; his knowledge and understanding of one brought life and colour to the other.  There are so many fascinating parallels between these two ancient and significant disciplines. Both, at their very core, are generally outward looking, with a view to alleviate suffering in this world. Schweitzer is an unforgettable figure in the study of the way that theology and medicine have interacted in the 20th century and his legacy will forever reveal itself ‘in the colours and textures that come alive in others because of him’ [Albert Schweitzer].