The RCP is home to an excellent collection of books donated by RCP fellow Evan Bedford (1898–1978). There are over 1,000 books in this collection, dating from the 16th century to the 1970s, each one drawn from his area of expertise, cardiology. Now many of the 19th century items have been digitised and are available to read online for the first time as part of the UK Medical Heritage Library (UK-MHL) project.

Arterial hypertonus, sclerosis and blood-pressure is a textbook by William Russell, a fellow of the Royal College of Physicians, Edinburgh. Specialising in clinical medicine and pathology, he worked with the Royal Infirmary and the School of Medicine in Edinburgh. Russell is best known for his work on cancer cells: Russell bodies are named after him. This book, published in 1907, focused on arteries and circulation. It is a fascinating read as it describes cases from Russell’s own practice and his process of diagnosis and treatment. He included cases such as that of Mrs C, a 77-year-old woman who suffered a loss of vocabulary when shopping, and later collapsed and became partially paralysed. She went on to recover most of her movement and words.

The book also featured 36 illustrations to accompany the text. There are microphotographs that show cross sections of arteries in various conditions as well as a number of conditions that affected blood pressure. Russell also included instructions on how to use various diagnostic instruments such as Dr George Oliver’s haemomanometer. He recommended using this instrument, in particular the version with a spirit index rather than a mercury one, and it included a handy wrist strap. This made it portable: perfect for a travelling physician in the early 20th century.

Diseases of the heart and aorta is a brightly coloured textbook by Arthur Doughlas Hirschfelder, an associate in medicine at John Hopkins University. The pace of medical discoveries was moving quickly at the beginning of the 20th century, so textbooks such as these were often updated to record new information. The aim of this book was to give specialists in internal medicine practical facts and instructions for diagnosis and treatment. Some of the new discoveries detailed include studies showing the importance of investigating carbon dioxide levels in the alveolar air of the lungs, and new ways of classifying conditions related to syphilitic arterial disease. There is also much discussion of the use of the electrocardiograph (ECG) to discover abnormal heartbeats. Another interesting addition is the examination of the use of digitalis, a chemical derived from foxgloves, which can be highly toxic if used incorrectly.

This textbook contains 344 illustrations produced by Hirschfelder himself. There are also photographs of cardiology equipment and hearts in various conditions as well as radiographs of the chest 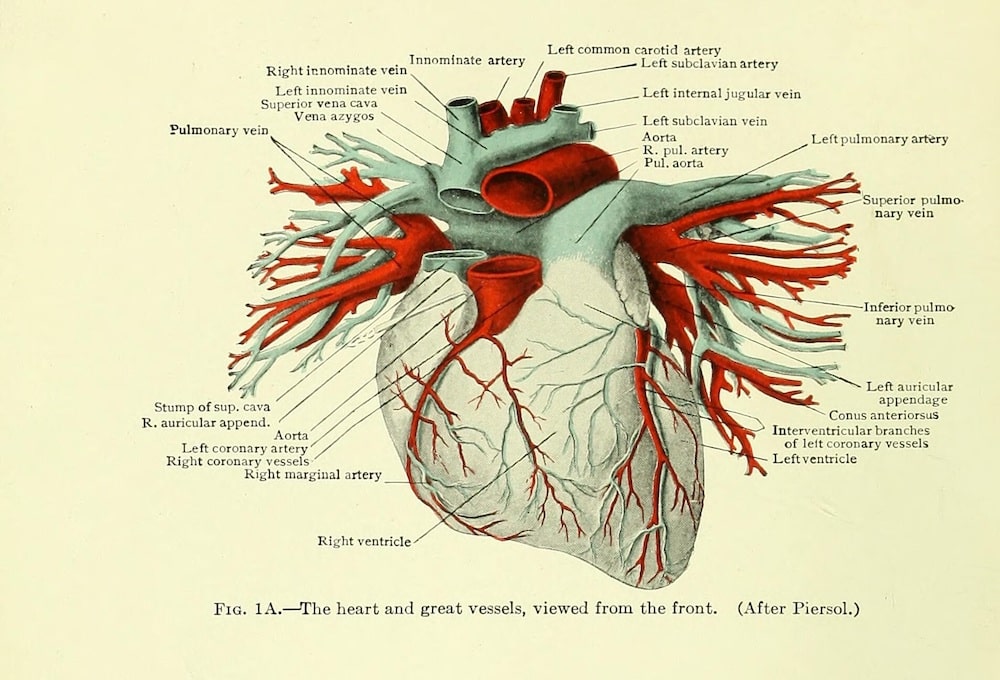 The Schott methods of the treatment of chronic diseases of the heart, with an account of the Nauheim baths and of the therapeutic exercises is a fascinating book which details a system of cardio-therapy developed by August and Theodor Schott. Their aim was to treat chronic diseases of the heart using a combination of exercise and mineral baths. The headquarters of the Schott practitioners was in Bad Neuheim, a town famed for its therapeutic waters; former American president Franklin D. Roosevelt lived there for a time as his father was treated for a heart condition. Under the Schott method patients would bathe in order to reduce high blood pressure. Bezly-Thorne, the author of this book, attempted to demonstrate the accuracy of such claims through anecdotes relating to his own experience of the baths, the stories of other patients and through examining sphygmograph tracings. 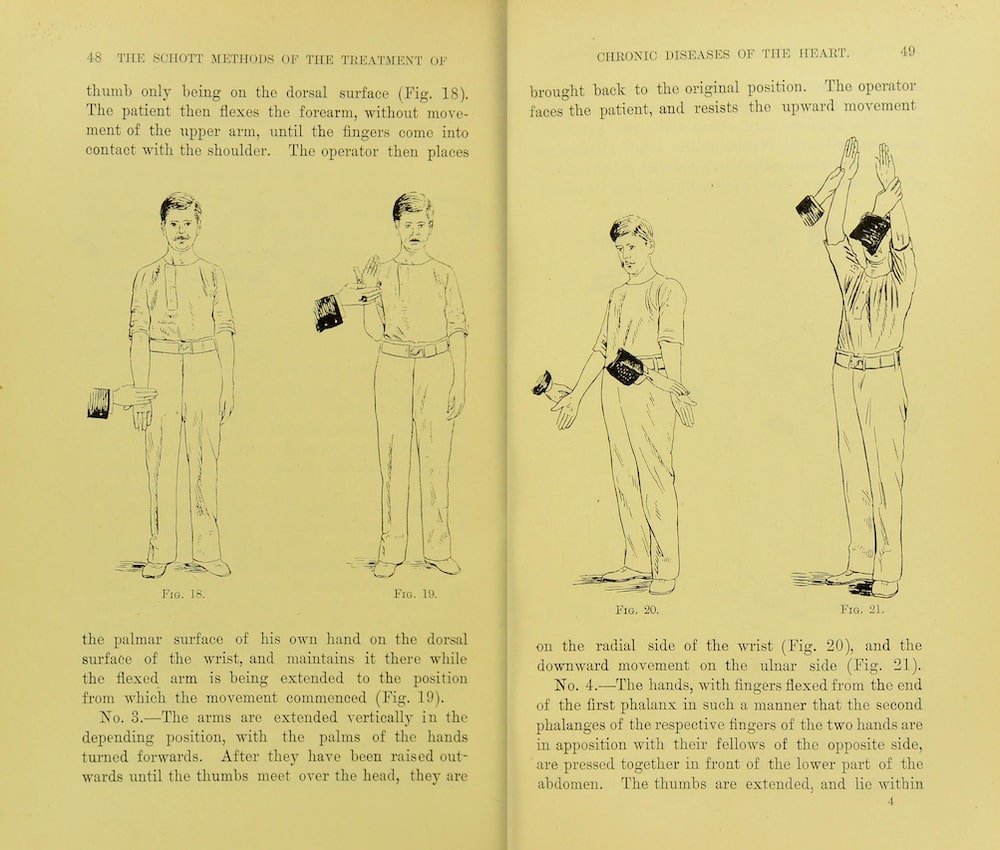 The Schott methods of the treatment of chronic diseases of the heart, with an account of the Nauheim baths and of the therapeutic exercises. William Bezly Thorne, published London, 1896.

However, the Schott method was not all about relaxing in baths. Physical exercise was also required of patients. Called Widerstand Gymnastik, or gymnastics with resistance, force was applied to different muscles to create tension without preventing motion. Rest was taken between movements and patients were encouraged to control their rate of breathing to limit the strain on the heart and lungs. As the session went on, the resistance was increased. Advocates of the method claimed that these exercises would improve the dilation of the heart and decongest the liver. Purple-blue hands and feet would turn red, waxy foreheads would turn pink and dullness over the heart would disappear. For any physicians outside of Bad Nauheim, Bezly Thorne included step-by-step instructions and images of the exercises so they could use them with their own patients.

These are just three items out of many cardiology texts being digitised as part of the UK-MHL. More will be added in the coming months, in particular more volumes from the Evan Bedford collection.

Visit the UK-MHL via the Internet Archive or the Wellcome Library for more digitised books from the RCP collection. The original copies of the books can be accessed in the RCP library reading room.